How Ants Survive and Choose Their Leader

Update Required To play the media you will need to either update your browser to a recent version or update your Flash plugin.
By VOA
25 June, 2014

Scientists have always been interested in the high level of organization in ant societies. American researchers have watched ants build life-saving rafts to keep afloat during floods. They also have documented how ant colonies choose their next queen – the female whose job is to produce eggs.

New technology is helping to improve researchers' understanding of the insects. But there is still a lot to be learned.

Fire ants living in Brazilian forests are perfectly at home in an environment where flooding is common. To save themselves, the insects connect their legs together and create floating rafts. Some ant rafts can be up to 20 centimeters wide.

David Hu is a mechanical engineer with the Georgia Institute of Technology, also known as Georgia Tech. He says ants know how to join together tightly. 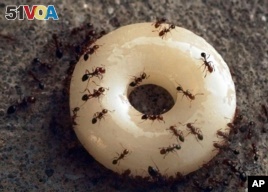 "If you have 100 ants, which means 600 legs, 99 percent of those legs will be connected to a neighbor. So they're very, very good at maintaining this network."

David Hu and other Georgia Tech researchers wanted to study ants and the secret of their engineering. They froze ant rafts and then look at them with the help of computed technology, or CT, images.

The pictures showed that larger ants serve in central positions to which smaller ants hold. The larger ants form pockets of air that keep the insects afloat.

Scientists say small robots or materials that can change shape could be programmed in a similar way, working towards a shared goal.

Researchers at North Carolina State University are also studying ants. They examined how Indian jumping ants choose the leader of the colony when they lose their top female or queen.

Researcher Clint Penick says all the worker ants in the colony are females. His team found that the work ants start a series of competitions or battles. The team found that some workers became physically larger and that led to the release of chemicals in the insects.

"Within a matter of days, we see changes in dopamine in the brain that we think are linked to the reproduction that starts in these workers."

Soon, the winning ant starts developing ovaries, the organs required to produce eggs, while its brain decreases in size. The winning ant also begins standing taller and generally lives three times as long as the other ants.

Scientists say this behavior and the release of neural hormones are the result of genetic orders. Scientists say the new findings may help researchers better understand the link between hormones and genes in human beings.

This report was based on a story from VOA's George Putic.