How COVID-19 Affects the Lungs

Update Required To play the media you will need to either update your browser to a recent version or update your Flash plugin.
By Anna Matteo
30 March 2020

Much is unknown about the disease COVID-19. But health experts say they do know this: Age makes a big difference as to whether a person infected with the new coronavirus lives or dies.

The reason is something called "reserve capacity." The Associated Press spoke with several doctors about the subject. One of them is Richard Baron, an expert in health care for older adults. He heads the American Board of Internal Medicine, a non-profit group. 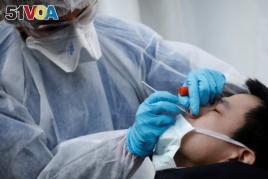 A medical biologist, wearing a protective suit, administers a nasal swab to a patient at a drive-through testing site for coronavirus disease (COVID-19) at the city hall of the 17th district in Paris

Baron notes that "at age 18, you have a lot of extra lung capacity you don't use unless you're running" a long race.

He said that the ability of our lungs to process the air we breathe decreases with age, even in healthy people. So, the lungs of older men and women do not have this extra capacity.

"If you're an old person," said Baron, "even a mild form (of COVID-19) can overwhelm your lungs if you don't have enough reserve."

How does COVID-19 affect the lungs?

The new coronavirus is like most respiratory viruses. It affects the movement of air into and out of the lungs. The virus is spread by droplets from an infected person's mouth when they cough. Or the droplets can come from their nose when they sneeze.

Most people who get COVID-19 experience mild to moderate symptoms like coughing and high body temperature, or fever. These people generally recover. With other people, the virus gets deep into the lungs and causes a severe infection: pneumonia.

They saw something unusual in the images.

Healthy lungs look mostly black on medical scans. This is because they are full of air. An early infection with bacterial pneumonia shows up on chest CT scans as cloudy in part of a lung.

Adam Bernheim works as a radiologist at Mount Sinai. He notes that in people who get COVID-19 pneumonia, these cloudy areas seem to form on the outside edge of both lungs, by the rib bones. As the infection worsens, the clouds form rounded clusters and slowly turn white. For the patient, breathing becomes difficult.

Aimee Moulin works as an emergency care specialist at the University of California Davis Medical Center. She told the AP that when a patient reaches this point, "the best treatment we have is supportive care."

By that she means helping a person to breathe when the oxygen levels in the patient's blood starts to drop. For some people, it is enough to have oxygen sent through a face mask or tubes in the nose. However, the very sick will need a breathing machine, also called a ventilator.

"The goal is to keep the person alive until the disease takes its course" and the lungs begin to heal, explained Neil Schachter, another doctor at Mount Sinai.

Doctors say that the very worst cases develop a condition called A-R-D-S, or ARDS. This is short for acute respiratory distress syndrome. At this point, the lungs fill with fluid. Dr. Baron says that this is the body's natural defense system trying its best to fight the infection by attacking the lung.

What else is impacted?

Last week, Chinese doctors told members of the American College of Cardiology to watch for additional problems in severe COVID-19 cases. The Chinese doctors warned to be especially watchful with people who have heart disease.

The worst off may need blood thinning drugs as their blood starts to harden, blocking passages. Also, the heart may suffer damage from the lack of oxygen and from inflammation in the body.

The Chinese doctors gave other warnings. They noted that age is not the only risk factor. Medical records from China show that 40 percent of people who required critical care had other health problems, such as heart disease and diabetes.

Can lungs recover from COVID-19?

Doctors say it is too soon to know about any lasting trouble for patients who recover from COVID-19.

The World Health Organization has said that it can take three to six weeks to recover from a severe case of the disease. But it could take months to get back to normal activity after any form of severe pneumonia. This is especially true if the person also had earlier health problems.

Doctors say that recovery depends, in part, on how long someone was on a breathing machine. For people who had to stay on such a machine for four weeks, experts say it can take six months to a year to completely heal.

The Associated Press reported this story. Anna Matteo adapted the for VOA Learning English. George Grow was the editor.

reserve – n. a supply of something that is stored so that it can be used at a later date

capacity – n. the ability to hold, receive or store something
overwhelm to defeat (someone or something) completely

radiologist – n. a doctor that specializes in a branch of medicine that uses some forms of radiation (such as X-rays) to diagnose and treat diseases

take its course – idiom : to allow something to happen without trying to control it