How Difficult Should Organic Chemistry Be?

Update Required To play the media you will need to either update your browser to a recent version or update your Flash plugin.
By Dan Friedell
22 October 2022

The 84-year-old professor wrote a famous book: "Organic Chemistry" which is still used in many college classes. He taught the class for many years at Princeton University before retiring in 2007. Since then, he taught the subject at N.Y.U. on a series of one-year contracts.

The New York Times reported recently that N.Y.U. students started an appeal against Jones. Eighty-two students, out of 350 taking his class last spring, signed the document saying they believed he was not fairly considering their work. They were unhappy with their low grades and they felt his teaching method made a difficult subject harder for them to learn. They also told N.Y.U. that bad grades hurt their chances of getting into medical school. 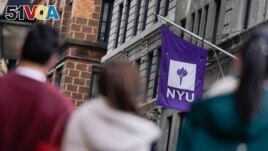 The Times said that Jones defended his teaching method. In fact, he is known for starting a new teaching method that centers on problem-solving rather than remembering without thinking. He said some students were not coming to class or watching videos from the class. Jones said grades fell even as he made tests easier. He said, coming out of the COVID-19 pandemic, the students not only did not study, but they also did not seem to know how to study.

Just before the start of classes in autumn, N.Y.U. decided to end Jones' contract. A spokesman said the university was evaluating all classes, including organic chemistry, in which a high percentage of students receive low grades. The school also offered to reconsider the students' low grades in Jones' class.

The firing of Jones brought thousands of comments from students, former students, and professors. Some felt that Jones should have made the class easier and changed his ways of dealing with or grading students. Others supported keeping the class's demanding instruction and grading systems.

Renee Link is a chemistry professor at the University of California, Irvine. She told VOA: "When you see these things, and we see these issues come up, it's easy to put it on students or on faculty, but really, it's a systemic problem and it's not any individual's fault. Like, everybody's got to share in the blame here."

Link said she uses a system known as specifications grading. The idea, she said, is to start the study term by showing students how they can prove their abilities. If they can meet the highest goals, they can get a good grade at the end of the term. Some college professors think they should limit the number of top grades given out to students. But Link said there is no limit to the number of top grades she would give out.

Link said specifications grading permits students to learn at their own speed. Link said, students can progress at a slower speed and still show what they learned.

"We can give students multiple attempts over time to demonstrate that they've learned something, without necessarily penalizing them for not having learned it when we thought they should have," Link said.

One of the concerns about Jones' class at N.Y.U. was that students felt they did not have enough chances to prove themselves. If they did poorly on a test, they argued, it would sharply affect their overall grade.

Geri Kerstiens is a chemistry professor at the University of California, Santa Cruz. Kerstiens wants to change the idea that some classes, called "weeded-out" classes, are set up to prevent students from moving forward.

Medical schools in the U.S. require organic chemistry. So, if a student does poorly in class, they might not have a chance to study to become a doctor.

Kerstiens told VOA there are two ways to think about grades. She said people understand that an "A" grade shows a medical school or employer that a student is prepared to work or study at a high level.

Kersteins added, "But on the flip side, grades are terrible. They are not truly representative of what students can do in many cases."

She proposed that there should be a way to "meet in the middle" and permit students to demonstrate their abilities in a way that is "fair and equitable." She also suggested having students work together on projects and having several tests during the study term so that no single test is more important.

Link said she is worried that people who are not close to the teaching of chemistry may find faults with the younger generation of students. However, she is now seeing thoughtful conversations among people who teach the subject.

Kerstiens said she hopes the story about Jones at N.Y.U. leads people who guide chemistry departments at universities to think about making changes. They should think about chemistry education, she said, and why they do things "the way they've always been done, because that only works for some people."

Fire –v. to dismiss someone from a job

Grade -n. a comparative or ranked evaluation given to students by teachers, often based on a percentage scoring system

Fault –n. a mistake or source of blame

Specification –n. a requirement which is clearly defined

Penalize –v. to punish or bring sanction or negative effects

Flip side –n. the opposite side

Equitable –adj. fair to all persons or groups involved