How Dirty Is 'Greasing Someone's Palm'?

Update Required To play the media you will need to either update your browser to a recent version or update your Flash plugin.
By VOA
05 November 2022

On this program we explore words and expressions in the English language. We give examples and notes on usage.

Today we talk about something that sounds dirty because it is – to grease someone's palm. 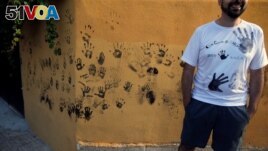 When we grease someone's palm, we give them money, or something else valuable, to get what we want. Simply put, it is an act of bribery. For example, if someone greases a government official's palm, the person secretly gives money to the official in order to get something they want.

You may also hear this expression used with the word oil instead of grease.

Grease and oil help some machines work smoothly. Grease and oil are both black, slippery materials. They prevent friction when pieces of machinery touch or rub together.

You could argue that bribing people to get what you want works the same way. It makes a process work better – at least for the person doing the greasing.

Now, sometimes when we grease someone's palm, it is not as serious as bribery.

If you have ever secretly put money into someone's hand or palm for the purpose of getting a favor from them ... you have greased their palm. But don't worry. Palm-greasing is not always illegal. Sometimes it just simplifies a process or helps avoid a long wait. Other times it gives you access that may be denied to others.

For example, at a restaurant you could give someone money to get a better table. You could also give money to a tour guide to see areas closed to others.

These examples of palm-greasing may be secret but they are not illegal. They simply make something happen more quickly or easily.

And that brings us to the end of this Words and Their Stories. Until next time ... I'm Anna Matteo.

oil – n. any of numerous greasy flammable usually liquid substances from plant, animal, or mineral sources that do not dissolve in water and are used especially as lubricants, fuels, and food

palm – n. the underside of the hand between the fingers and the wrist

slippery – adj. having a surface smooth enough to cause one to slide or lose one's hold

friction – n. the force that resists motion between bodies in contact

favor – n. an act of kindness

access – n. permission or power to enter, approach, or make use of

tour guide – n. a person who takes people on trips through an area and explains the interesting details about it