How Do Americans View International Students?

Update Required To play the media you will need to either update your browser to a recent version or update your Flash plugin.
By Dan Friedell
16 October 2021


Jack Li received his doctorate in science from a major university in the southeastern United States in 2020. The Chinese student said research opportunities remain strong in the U.S. but he planned to continue his work in Germany.

Li told VOA earlier in 2021 that part of his decision was because of the "political environment in the U.S." Li had good reason to feel that way.

A recent survey by an education policy group showed Americans are somewhat concerned about too many Chinese students coming to study. The American Council on Education (ACE) talked to 1,000 Americans in the first part of 2021. It found that 43 percent of the people in the survey said they think international students take away places from American students.

In addition, about 40 percent also said they think "some international students are sent by their country to try and steal valuable U.S. intellectual property." When China was used as an example, nearly 50 percent said it is a "widespread problem." 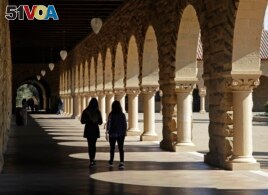 Sarah Spreitzer is director of government relations for ACE. She helped write the report that came from the survey. She said it was important for ACE to learn how Americans feel about international students.

In July, both Secretary of State Antony Blinken and Education Secretary Miguel Cardona talked to a group of international students at the EducationUSA Forum. Using video conferencing, Blinken said, "It's strongly in our national interest for the United States to remain the world's top study destination for international students." And Cardona added that international education helped people around the world understand and effectively connect with each other.

She pointed to a program called Optional Practical Training. The program permits international students working on degrees in science, technology, engineering and math to stay in the U.S. for up to three years to continue their training after graduation.

"Under the Trump administrations, there had been rumblings that they were going to withdraw the program, which would've been really problematic."

Spreitzer explained students make long-term decisions about their education and might not come to the U.S. if programs such as Optional Practical Training get taken away. And for students who already were in the middle of their studies, it is difficult to deal with fast policy change. 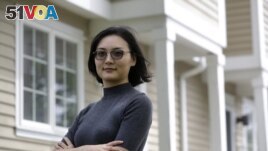 In this Monday, June 15, 2020, photo Xujiao Wang, 32, of East Providence, R.I., stands for a photograph outside her home. Wang works for a Massachusetts company and is on the Optional Practical Training program for student visa holders.

While the Biden administration is more welcoming with international students, Fischer, the higher education writer, said some issues remain.

In August, the U.S. welcomed international students, including those from countries under COVID-19 restrictions, back to the U.S. Around the same time, the U.S. government dropped its case against five Chinese scientists accused of lying on their visa application. They were accused of hiding their ties to the Chinese military.

While the cases may not seem directly related to international students, "it can affect their behavior," Fischer added.

Spreitzer said she is looking forward to the next Open Doors report. She hopes the numbers will show that international students are interested in coming back to the U.S.

"We're very hopeful," Spreitzer said, "that students are receiving that message that we are welcoming, we are open for business, and that the U.S., in general, we support our international students."

Are you a student thinking about coming to study in the U.S.? Do you think you will feel welcome? Tell us in the Comments Section and visit 51VOA.COM.

opportunity – n. an amount of time or a situation in which something can be done, a chance

visible– adj. able to be seen

geopolitical– adj. a way of referring to politics and the relationship between nations around the world

destination – n. a place to which a person is going

optional – adj. available as a choice but not required

practical– n. appropriate or suited for actual use

rumblings– n. written or spoken comments showing that people are considering something