Update Required To play the media you will need to either update your browser to a recent version or update your Flash plugin.
By Anne Ball
10 January, 2016


Why is it that when dogs drink, water seems to go everywhere?

When my dog drinks from her bowl, there is no question, water will end up on the floor. It looks like a sloppy, unorganized way to get a good drink of water.

Researchers at Virginia Tech University have been studying how dogs drink. They say dogs know exactly what they are doing. The animals are actually making precise movements at a high speed. This helps them get the fluid they need when they are thirsty.

It turns out that neither dogs, nor cats, have a full set of cheeks. This means they cannot create suction to drink, like humans or elephants and horses.

How Do Dogs Drink?

Dogs lap, or take up, the water with their tongues curled backward. As they lap, they move their tongues very quickly to build up momentum. That forces the water into a column and up into their mouths.

The Virginia Tech researchers filmed 19 dogs of different sizes and breeds as they drank water. They created different laboratory models to measure tongue motion, and the amounts of water taken in.

Using the data from these experiments, the researchers were able to make a model that shows how a dog drinks water.

The researchers said that since the mouths of dogs and cats are structured nearly the same way, they thought they would drink water the same way, too. 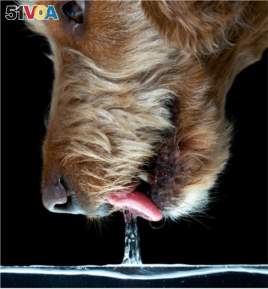 How Do Dogs Drink?

But here is a surprise. The studies showed each family of animals has its own special drinking method.

"We know cats and dogs are quite different in terms of behavior and character," said Sunghwan "Sunny" Jung, a study author and an associate professor of biomedical engineering and mechanics at Virginia Tech.

"But before we did fundamental studies of how these animals drink fluids, our guess was dogs and cats drink about the same way. Instead we found out that dogs drink quite differently than cats," he said.

What is the difference?

Dogs must quickly move their tongues down into the water using momentum to bring the water up and into their mouths. Cats don't bend their tongues to drink like dogs. Cats use less momentum and a more gentle action. They just skim, or barely touch, the surface of the water to drink it.

"Cats tend be viewed as neater, dogs are messier, but dogs really have to accelerate their tongues" to make good use of the way the fluid column works, said researcher Sean Gart, a Virginia Tech graduate student.

Their findings were published in the Proceedings of the National Academy of Sciences.

Rick Pantaleo reported this story. Anne Ball wrote it for Learning English. Hai Do was the editor.

Do you have a dog or cat? Are they messy drinkers? We want to hear from you. Write to us in the Comments section or on 51VOA.COM.

sloppy – adj. not careful or neat

suction – n. the act or process of sucking

momentum – n. the strength or force that something has when it is moving

column - n. something tall and thin in shape