How Do Hurricanes Form?

Update Required To play the media you will need to either update your browser to a recent version or update your Flash plugin.
By Mario Ritter
08 September, 2017

Hurricane Irma has struck Cuba and now threatens the state of Florida with strong winds and rain. The storm has caused deaths and widespread destruction on several Caribbean islands.

Hurricane Katia is in the southern Gulf of Mexico. It is nearing Mexico's eastern coast. And Hurricane Jose is gaining strength in the Atlantic Ocean.

The three hurricanes come as the state of Texas recovers from Hurricane Harvey. The huge storm caused severe flooding and billions of dollars in damage in Houston, the country's fourth-largest city.

Hurricane season in the Atlantic Ocean goes from June 1 to November 30. And the month of September is the peak of storm activity.

Hurricanes are the most powerful storms in the Earth's atmosphere. The storms have different names depending on where they take place. Scientists call all these storms tropical cyclones.

Although they have different names, all these storms form in the same way.

Scientists at the American space agency NASA describe tropical cyclones as huge weather "engines" that use warm, moist air as fuel. They can only form over warm, tropical waters near the equator.

A tropical cyclone develops when warm moist air near the surface of the ocean rises. This creates an area of unusually low air pressure.

Higher-pressure air from surrounding areas pushes in to take the place of the warm, rising air. It becomes warmer and moister and rises, too.

The rising, moist air goes high into the atmosphere, where temperatures are low. This creates wind. The moisture forms clouds. The developing weather system begins to spin because of the Earth's rotation.

As the storm spins faster and faster, what is called an "eye" of the storm develops at its center. This is a calm area of very low pressure. Higher pressure air from above flows down into the eye. 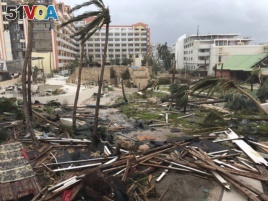 Meteorologists use measurements of wind speed to place tropical cyclones in categories. When a hurricane's wind speed reaches 155 kilometers an hour, it is called category two.

The categories go up to category five, the most dangerous and catastrophic storm. A category-five storm has wind speeds measured at over 250 kilometers per hour. They can cause a storm surge, or a rise in water levels of more than five meters.

The National Oceanic and Atmospheric Administration, or NOAA, operates two satellites that track weather and storms in the eastern Pacific and Atlantic Oceans. NOAA provides maps from the (GOES) satellites online.

Mario Ritter adapted this story for VOA Learning English from materials provided by NASA and other sources. Ashley Thompson was the editor.

Spin –v. to move in a circular way

Rotation –n. the state of turning on an axis

Meteorologist –n someone who works in the field of weather science