Drones Helping to Save Lives in Rwanda and Madagascar

Update Required To play the media you will need to either update your browser to a recent version or update your Flash plugin.
By Bryan Lynn
24 October, 2016


Drone aircraft are now being used to transport blood, medicine and supplies in southern Africa.

The Rwandan government signed a deal to cooperate with the company Zipline. Zipline is based in the United States. The American shipping company United Parcel Service is providing money and operational support for the project. 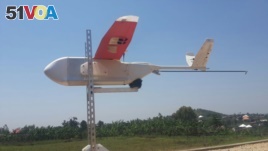 Drones Helping to Save Lives in Rwanda and Madagascar

Another partner is Gavi, the Vaccine Alliance. The organization, launched by the Bill & Melinda Gates Foundation, provides vaccines to the world's poorest countries.

Rwandan officials say that deliveries of blood and medicine by truck take at least four hours, even under the best conditions. With drones, the trip can be completed in as little as 15 minutes.

The World Health Organization (WHO) says Africa has the world's highest rate of pregnancy deaths resulting from bleeding. This makes the availability of blood and transfusions very important for women across the continent, it says.

The process begins with a doctor requesting blood or medicine by telephone or a text message. Someone then puts the supplies into a special box, which is loaded onto a drone.

The drone is then launched and flies by itself to the medical center. The supplies are dropped from the air and float to the ground in a parachute.

Zipline says its drones can complete hundreds of deliveries per day.

Another American company has completed drone flights in Madagascar, along Africa's eastern coast. The company, Vayu, is flying blood and laboratory materials from rural villages to a research station for testing.

The program receives financial support from Madagascar's government and the United States Agency for International Development (USAID). The research station is a project of the U.S.-based Stony Brook University, in Stony Brook, New York.

University officials say the drones help doctors speed up the identification of disease in patients and make quick deliveries of vaccines.

Bryan Lynn wrote this story for VOA Learning English. Additional material came from a report by VOA's Edward Rwema and the Associated Press. George Grow was the editor.

transfusion – n. the transferring of blood into another person