How English Evolved Into a Modern Language

Update Required To play the media you will need to either update your browser to a recent version or update your Flash plugin.
By Paul Thompson
01 January, 2013

This is Steve Ember. And this is Shirley Griffith with the VOA Special English program, EXPLORATIONS. Today we present the second of our two programs about the history of the English Language.

Last week, we told how the English language developed as a result of several invasions of Britain. The first involved three tribes called the Angles, the Jutes and the Saxons. A mix of their languages produced a language called Anglo-Saxon, or Old English. It sounded very much like German. Only a few words remained from the Celts who had lived in Britain.

Two more invasions added words to Old English. The Vikings of Denmark, Norway and Sweden arrived in Britain more than one thousand years ago. The next invasion took place in the year ten sixty-six. French forces from Normandy were led by a man known as William the Conqueror. 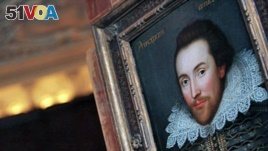 Over time, the different languages combined to result in what English experts call Middle English. While Middle English still sounds similar to German, it also begins to sound like Modern English.

Here Warren Scheer reads the very beginning of Geoffrey Chaucer's great poem, "The Canterbury Tales" as it was written in Middle English.

Chaucer wrote that poem in the late thirteen hundreds. It was written in the language of the people. The rulers of Britain at that time still spoke the Norman French they brought with them in ten sixty-six.

The kings of Britain did not speak the language of the people until the early fourteen hundreds. Slowly, Norman French was used less and less until it disappeared.

The English language was strongly influenced by an event that took place more than one thousand four hundred years ago. In the year five ninety-seven, the Roman Catholic Church began its attempt to make Christianity the religion of Britain.

The language of the Catholic Church was Latin. Latin was not spoken as a language in any country at that time. But it was still used by some people.

English is a little like a living thing that continues to grow. English began to grow more quickly when William Caxton returned to Britain in the year fourteen seventy-six. He had been in Holland and other areas of Europe where he had learned printing. He returned to Britain with the first printing press.

The printing press made it possible for almost anyone to buy a book. It helped spread education and the English language.

Slowly, during the fifteen hundreds English became the modern language we would recognize. English speakers today would be able to communicate with English speakers in the last part of the Sixteenth Century.

It was during this time period that the greatest writer in English produced his work. His name was William Shakespeare. His plays continue to be printed, acted in theaters, and seen in motion pictures almost four hundred years after his death.

Experts say that Shakespeare's work was written to be performed on the stage, not to be read. Yet every sound of his words can produce word pictures, and provide feelings of anger, fear, and laughter. Shakespeare's famous play "Romeo and Juliet" is so sad that people cry when they see this famous story.

The development of the English language took a giant step just nine years before the death of William Shakespeare. Three small British ships crossed the Atlantic Ocean in sixteen-oh-seven. They landed in an area that would later become the southern American state of Virginia. They began the first of several British colonies. The name of the first small colony was Jamestown.

In time, people in these new colonies began to call areas of their new land by words borrowed from the native people they found living there. For example, many of the great rivers in the United States are taken from American Indian words. The Mississippi, the Tennessee, the Missouri are examples.

Other Native American words included "moccasin", the kind of shoe made of animal skin that Indians wore on their feet. This borrowing or adding of foreign words to English was a way of expanding the language. The names of three days of the week are good examples of this. The people from Northern Europe honored three gods with a special day each week. The gods were Odin, Thor and Freya. Odin's-day became Wednesday in English, Thor's-day became Thursday and Freya's-day became Friday.

For example, the word "shampoo" for soap for the hair came from India. "Banana" is believed to be from Africa.

Experts cannot explain many English words. For hundreds of years, a dog was called a "hound." The word is still used but not as commonly as the word "dog." Experts do not know where the word "dog" came from or when. English speakers just started using it. Other words whose origins are unknown include "fun," "bad," and "big."

English speakers also continue to invent new words by linking old words together. A good example is the words "motor" and "hotel." Many years ago someone linked them together into the word "motel." A motel is a small hotel near a road where people travelling in cars can stay for the night.

Other words come from the first letters of names of groups or devices. A device to find objects that cannot be seen called Radio Detecting and Ranging became "Radar." The North Atlantic Treaty Organization is usually called NATO.

Experts say that English has more words that explain the same thing that any other language. For example, the words "large," "huge," "vast," "massive," and "enormous" all mean something really "big."

People often ask how many words there are in the English language. Well, no one really knows. The Oxford English Dictionary lists about six hundred fifteen thousand words. Yet the many scientific words not in the dictionary could increase the number to almost one million.

And experts are never really sure how to count English words. For example, the word "mouse." A mouse is a small creature from the rodent family. But "mouse" has another very different meaning. A "mouse" is also a hand-held device used to help control a computer. If you are counting words do you count "mouse" two times?

Visitors to the Voice of America hear people speaking more than forty different languages. Most broadcasters at VOA come from countries where these languages are spoken. International organizations such as VOA would find it impossible to operate without a second language all the people speak.

The language that permits VOA to work is English. It is not unusual to see someone from the Mandarin Service talking to someone from the Urdu Service, both speaking English. English is becoming the common language of millions of people worldwide, helping speakers of many different languages communicate.

This Special English program was written and produced by Paul Thompson. This is Steve Ember.

And this is Shirley Griffith. Join us again next week for another EXPLORATIONS program, on the Voice of America.