Update Required To play the media you will need to either update your browser to a recent version or update your Flash plugin.
By Jill Robbins
15 March, 2019


Do you like to drink Coca-Cola? You can thank enslaved Africans. They brought the kola nut – one of the main parts of Coca-Cola – to what is now the United States. West Africans chewed the nut for its caffeine.

Enslaved Africans also brought watermelon, okra, yams, black-eyed peas and some peppers. These foods are commonly eaten in the U.S. today. They show how Africans forced into slavery -- beginning in the 1500s -- influenced the American diet. 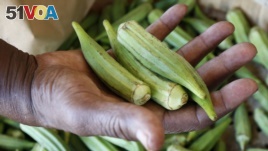 Frederick Opie wrote a book about some of the foods that connect Africa and America. The book is called "Hog and Hominy: Soul Food from Africa to America." Opie also teaches history at Babson College in Massachusetts.

He says, "If you know what people eat, you can find out where they're from."

Opie explains that people who were bringing enslaved Africans to North America wanted to keep them alive and earn a profit. As a result, Africans on the slave ships were fed food they knew and liked. Those foods landed along with the people.

Opie explains that fruits and vegetables brought from Africa grew well in America. One reason is because enslaved Africans planted their own gardens to help feed themselves.

In time, the plants from Africa slowly moved from gardens of the enslaved to those of the wealthy and powerful. For example, the homes of U.S. presidents George Washington and Thomas Jefferson had gardens planted with seeds from Africa.

Those fruits and vegetables changed the way cooks made pies in America. In England, pies were made with meat. African-Americans took the English meat pie and made it with fruit or vegetables, such as sweet potatoes.

Kelley Deetz is with Stratford Hall in the U.S. state of Virginia and the writer of a book about the influence of Virginia's enslaved cooks. It is called "Bound to the Fire."

Yet for the most part, writer Kelley Deetz says the skilled black chef has been written out of American history. In fact, both their work and their skill shaped American food.

And, she adds, some ways of cooking that are well-known in the U.S. today were reported in West Africa before 1500. They include deep frying fish and barbecuing meats.

Deetz says these kinds of foods were critical to the creation of Southern, and in time American, food.

Many of these foods with roots in African American culture came to be known as "soul food." History professor and author Frederick Opie says the name was created during the Black Power movement of the mid-to-late 1960s. It was a way to identify food that showed the history of African Americans.

He adds that soul food is also "food that African Americans began to create a long time ago to eat with dignity as enslaved people in the diaspora."

Dora Mekouar reported on this story for VOA. Jill Robbins adapted it for Learning English, with additional information from George Washington's Mount Vernon. Kelly Jean Kelly was the editor.

enslave – v. to make (someone) a slave — usually used as (be) enslaved

indigenous – n. produced, living, or existing naturally in a particular region or environment

crave – v. to have a very strong desire for (something)

okra – n. a tall plant whose pods are eaten as a vegetable and are used in soups and stews

black-eyed peas – n. type of small, light bean that has a dark spot on it

barbecue v. to broil or roast (meat, fish, etc.) over hot coals or an open fire

cuisine – n. a style of cooking

coin – v. to create (a new word or phrase) that other people begin to use

diaspora – n. a group of people who live outside the area in which they had lived for a long time or in which their ancestors lived

What foods were brought to your country by people from other places? Did these foods change traditional cooking methods in your country? We want to hear from you. Write to us in the Comments Section.