How Important Is Tenure in Higher Education?

Update Required To play the media you will need to either update your browser to a recent version or update your Flash plugin.
By Dan Friedell
04 September 2021


How valuable would it be to have a guaranteed job for the rest of your life?

In the United States, few jobs come with lifetime appointments. Federal judges, including justices on the U.S. Supreme Court, and college professors are on the short list.

Professors can earn what is known as tenure.

The idea of tenure got popular over 100 years ago when university presidents at some famous schools decided it was important to protect professors from outside interference. The idea is that a professor with tenure is free to teach or do research even if their state's leader does not like the subject. As a result, it is rare for a professor with tenure to be dismissed.

Those who argue against tenure say professors might work hard leading up to what is known as a tenure review, and then stop working as hard after their job is safe. In addition, some experts worry that tenure protects professors who are accused of bad behavior.

Young professors who are hired for jobs where tenure is a possibility are said to have "tenure track" jobs. They often have a review after their fifth year. If they earn tenure, then they have a job that is largely guaranteed for as long as they want it.

The review is extremely detailed. Professors are judged by other members of the university on the quality of their teaching, the amount of research they have done in their subject and books and studies they have written. Professors at other schools write letters and past students can add their thoughts. 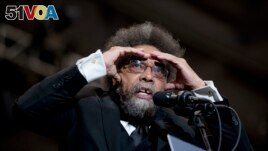 The idea of tenure has been in the news recently. Two well-known Black professors recently made public disputes they had with the tenure process at some famous universities.

Cornel West is a well-known professor who taught philosophy and African American Studies at Harvard. In February, he said Harvard rejected his request to be considered for tenure although he had a good five-year review. West had a tenured position at Harvard in the past but left the school in 2002 after a conflict with the university president. He went on to teach at Princeton University.

He went back to Harvard in 2016. West said he would leave Harvard to teach at the Union Theological Seminary in New York City.

Over the summer, reporter Nikole Hannah-Jones also was involved in a dispute over tenure. Hannah-Jones is the Pulitzer Prize-winning creator of the New York Times' "1619 Project" and has received the famous MacArthur Foundation "Genius Grant."

She was offered a position at the University of North Carolina at Chapel Hill that did not include tenure. Professors at the university's Hussman School of Journalism and students protested. Widespread criticism caused the university to reconsider and include tenure in its offer. Hannah-Jones rejected the new offer and decided to join Howard University in Washington, D.C. She will use money from outside organizations to start a journalism center there.

The tenure review is an important moment in a professor's career. Young professors often worry they will not do enough to get tenure, and they then worry that being denied tenure will be a bad mark on their record. One young professor, Geri Kerstiens, teaches at the University of California in Santa Cruz. She said Twitter is full of comments from professors worried about their tenure review, "because there are a lot of us and not as many jobs."

But being denied tenure can be a new beginning. Some professors are rejected for tenure but go on to find a better place to work. One professor found a position that offered job security and supported her best work.

How to value a professor's work

Anne Baranger is an experienced chemistry professor at the University of California at Berkeley. Half of her job is tenured and half is not. Her status, she said, is "unusual." She said her job is secure because "it is difficult to imagine getting rid of half a person and not the other half."

In the past, universities often gave equal weight to a new professor's ability to carry out research, teach and serve the university. If a professor was not good in one of those areas, they would be denied tenure. Now, however, some universities think about hiring professors who can spend more time in areas where they are strong. Geri Kerstiens is one of Baranger's former chemistry students. She just started a tenure-track job in Santa Cruz.

"I feel incredibly lucky to have gotten what I've gotten. It was lightning striking. It's just not something I was expecting."

What if tenure is denied?

Hannah Love is a philosophy professor at Portland Community College in Oregon. She was denied tenure at a different school early in her career. She was worried about what opportunities she would have after that. Now, however, she is happy at a community college because she can put more energy into teaching and helping students. She has a "continuous appointment," which means if she continues to do good work, her job is safe. She spoke with VOA about her earlier disappointment.

"In retrospect, it's one of the best things that happened because I kind of always wanted to teach at a community college. I think I'm exactly where I'm supposed to be, and professionally, it's a much better fit."

Baranger, the Berkeley professor, said she would like to see non-teaching employees at universities considered with the same intensity. It might make the university better overall.

"So it's a filter that's pretty serious and I don't think we would do something that required both so much work and was so frequently negative...I've never seen anybody fired. Ever."

What do you think about the tenure process at universities? Tell us in the Comments Section and visit 51VOA.COM.

tenure –n. the right to keep a job, especially the job of being a professor at a college or university, for as long as you want to have it

review –n. an act of carefully looking at or examining the quality or condition of something or someone : examination or inspection

journalism –n. the activity of collecting, writing and editing news stories for newspapers, radio and television

revamp –v. to make (something) better or like new again

get rid (of) –v. to remove or throw away something

in retrospect –n. when thinking about the past or something that happened in the past

filter –n. a device that is used to remove something unwanted from a liquid or gas that passes through it