How One Mom’s Painting Started a Worldwide Painting Party

Update Required To play the media you will need to either update your browser to a recent version or update your Flash plugin.
By Anna Matteo
01 February, 2019


The Internet can be a dark, oppressive place. Readers sometimes do not show their true identities and feel free to leave cruel comments.

So naturally, a schoolteacher in the U.S. state of Florida felt worried when her son wanted to share her artwork on the social media site Reddit. Cyndi Decker had recently taken an art class and made a painting of a huge white bird called an egret. 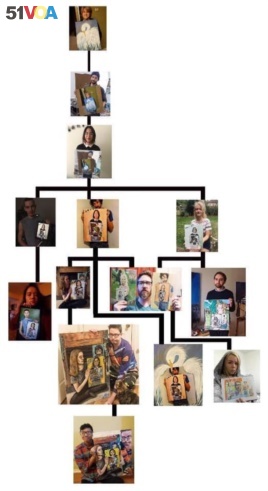 A much-needed flowchart to keep track of the "Mom painted a picture of an egret" meme.

Her proud son posted a photograph of Decker shyly holding her painting. Below it he wrote: "My mom painted this and said no one would like it. It's her 2nd painting."

Far from not liking it -- more than 24,000 people "upvoted" her painting, meaning they liked it!

Then a professional artist in Sweden saw the photo on Reddit.

Kristoffer Zetterstrand creates, among other things, paintings for the video game Minecraft. He decided to pay tribute to the mother-schoolteacher by painting Decker holding her painting. He even captured the shy look on her face.

Zetterstrand photographed himself holding his painting of Decker holding her painting. He posted the image on Reddit. The caption for his photograph is, "I painted somebody's mom."

Then, two days later a journalism student in Canada, Laila Amer, painted a picture of Zetterstrand holding his painting of Decker holding her painting.

She posted a photo of her holding her painting on Reddit. Her caption read, "But I painted the guy who painted the other guy's mom."

The meme took off!

In the very later paintings, the image of the original inspiration, Decker's egret, is so small you can barely see it!

Many artists around the world jumped into the process, many at the same time. It began to get confusing. People started calling the egret a swan.

So, someone stepped in and created a flowchart to show how the paintings developed.

The painting styles were all quite different. They began showing up not just on Reddit but on other social media platforms such as Facebook.

By this time, more than one million people had seen the paintings and pictures of paintings online. Cyndi Decker told a reporter from the Washington Post that she had been named the "the honorary mom of Reddit."

Kristoffer Zetterstrand, who first painted Decker, told reporters that he has received thousands of comments on Reddit and hundreds of messages and emails.

He says millions of people have now seen his painting on a number of social media websites. In interviews, he said he thought the whole experience has been really funny and strange.

Zetterstrand and Decker have been in touch with one another. He sent her his painting of her holding her painting as a gift.

Instead of the cruel comments she was expecting, Decker said so many people have been very kind to her. She joined Reddit just so she could thank them.

She wrote: "I was in fear I was going to read a lot of hateful comments. You all have proven me so wrong. I'm assuming most of you could be my kids, and y'all get a bad rap in this world. You all are compassionate, caring, and a ton of fun! Thanks for uplifting me! You all have inspired me instead."

People on the Internet also have asked her to post her next painting. But Decker said that she has no plans to do so. She says she does not want to "wear out her welcome."

She is happy to be famous just once. To use another English expression, it's better to leave at the height of the party.

Anna Matteo adapted this from several online stories including Roisin McVeigh's story published on DazedDigital.com and Allison Klein's story in the Washington Post. Kelly Jean Kelly was the editor.

cruel – adj. causing or helping to cause suffering : terrible and unfair

shyly – adv. doing something in a way that shows a dislike of attention

meme – n. an idea, behavior, style, or usage that spreads from person to person within a culture

caption – n. a sentence or group of words that is written on or next to a picture to explain what is being shown

inspiration – n. a person, place, experience, etc., that makes someone want to do or create something

uplifting – adj. something that improves the spiritual, social, or intellectual condition of something else

wear out her welcome – phrase To remain a guest in a place, especially someone's home, for too long, to the point where the host no longer wishes one to stay.