How Other Democracies Select Leaders

Update Required To play the media you will need to either update your browser to a recent version or update your Flash plugin.
By Hai Do
14 December 2020


Americans did not vote directly for Joe Biden or Donald Trump on Election Day on November 3. That makes the United States different from most democracies.

The system is known as the Electoral College.

Here is a look at how democracies worldwide choose their leaders.

In 1994, South Africa held its first elections in which citizens of all races were permitted to vote. South Africans vote for political parties rather than for candidates. The party that won the majority of seats in the National Assembly would then be able to elect its own leader as president of South Africa.

Nelson Mandela, the leader of the African National Congress (ANC), became president in 1994. The party has controlled the country's politics ever since. However, the ANC won with its smallest majority yet in 2019, with 57 percent of the vote. 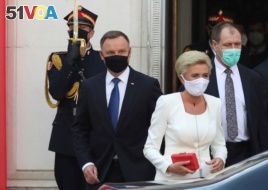 There has only been one first-round winner, with the re-election in 2000 of Aleksander Kwasniewski. Even Lech Walesa, the famous founder of Poland's anti-communist Solidarity movement, needed a second-round vote to become Poland's first popularly elected president.

Queen Elizabeth II is the head of state. But British voters choose the head of government, the prime minister.

Voters elect a lawmaker for their local area. Then, the party that wins the largest number of the 650-seat Parliament generally takes power, with the party leader becoming prime minister.

Boris Johnson's Conservative Party only got 44 percent of the popular vote in the 2019 election. But his party won an 80-seat majority in Parliament, permitting him to remain as prime minister.

Brazil chooses its president through direct election. The election is usually held in two rounds unless the first-round winner gets more than 50 percent of the accepted votes.

Voting is required in Brazil. This leads to high voter turnout but also a number of incorrect or empty ballots. The fine for failing to vote is less than one U.S. dollar. In 2018, Jair Bolsonaro became president after winning more than 50 percent of the votes in the second round.

The president of South Korea is directly elected by a single-round, popular vote. The candidate who gets the most votes wins the presidency. A person must be at least 40 years old to run for the office.

The country's current president, Moon Jae-in, won a special election in May 2017. The election was held two months after South Korea's Constitutional Court removed Park Geun-hye from office for corruption. She is now serving time in prison for abuse of power, bribery and other crimes.

New Zealand's prime minister is chosen by other lawmakers and is usually the leader of the party that gains the most votes in the election. Under New Zealand's voting system, parties must often form alliances to command a majority in the parliament.

Although New Zealand is a fully independent and democratic nation, its head of state remains Britain's Queen Elizabeth II. That means the prime minister must officially be approved by the Queen's representative in New Zealand, the governor-general.

Prime Minister Jacinda Ardern, the leader of the Labor Party, has been in office since October 2017. She won a second term in October of this year.

India, with nearly 1.4 billion people, is often called the world's largest democracy. The head of government is the prime minister. He or she is elected by members of the majority party of the Lok Sabha, the lower house of Parliament. In 2014, Narendra Modi became prime minister when his Bharatiya Janata Party (BJP) won the general election.

The president in India acts as the ceremonial head of state who can "advise, encourage and warn" the elected government. The president is indirectly selected by elected members of Parliament and state legislatures. In 2017, nearly 5,000 lawmakers voted to select Ram Nath Kovind as president.

Hai Do adapted this story for Learning English with reporting from the Associated Press. Ashley Thompson was the editor.

communism - n. a way of organizing a society in which the government owns the things that are used to make and transport products (such as land, oil, factories, ships, etc.) and there is no privately owned property

bribery - n. the act or crime of giving or accepting a bribe -- something given in order to get someone to do something