How to Talk about a Movie

Update Required To play the media you will need to either update your browser to a recent version or update your Flash plugin.
By John Russell
14 July 2022


Think about a time that you wanted to talk about a movie. How did you describe it?

In today's Everyday Grammar, we will use a reader's message to explore how to talk about a movie. We will consider three questions: What is the movie about? What did the main character think or do? How did the film affect you?

What is the movie about? 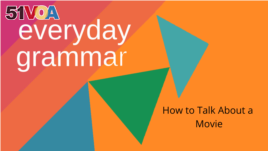 In a recent report, we asked our listeners and readers to send us a message describing a movie.

It's topic was unequal income distribution, they were using time to buy things, for example if you want to get on the bus then you had to give a certain amount of your lifetime for it.

Our first suggestion is to consider another structure to describe the subject of the movie. Esra wrote,

It's topic was unequal income distribution...*

While the structure ‘its topic was...' is fine, there is another structure that English speakers often use: is about + noun or noun phrase.

What is that movie about?

The past tense is fine too, as in "The movie was about..."

So, Esra could have written about In Time:

The movie was about inequality.

Note that we used "inequality" instead of "unequal income distribution." Although inequality's meaning is a bit broader, English speakers often use it in the sense of economic or financial inequality.

People used time to buy things. For example, if a person wanted to get on the bus, then they had to pay with a certain amount of their life.

In this case, we use the pronouns "they/their" because it is a very general description that refers to a person whose gender is not known.

What did the main character think or do?

Esra went on to explore another important issue: the thinking of the people in the film.

Its main star was thinking everyone should be equal and rich should distribute time between everybody.

We suggest changing "star" to "character." A character is a person who appears in a movie, book, or play. The most important character is known as the main character.

We also suggest changing "was thinking," a verb form known as the past continuous, to "thought," the simple past.

This is because we often use the past continuous to set up another action, as in "The main character was thinking about how to escape when his phone rang."

We could change Esra's sentence to something like this:

The main character thought everyone should be equal.

A few more details could be added in, as in:

The main character thought everyone should be equal in terms of how time was distributed.

How did the film affect you?

Esra did not describe the movie in terms of special effects or cinematography.

Rather, Esra described the film in terms of the film's ideas that explored human life, economy, and society:

What attracts me to the movie was it looked very similar to our world... Aren't we give our time to earn money.

We suggest using a consistent verb form, either present or past. The past tense form could be:

What attracted me to the movie was that it looked very similar to our world.

The question that Esra asked could involve the helping verb "do" instead of "be," as in:

Don't we give our time to earn money?

This question suggests that the film's effect was that it forced Esra to think about time, money, and how people spend their lives.

Please note that there are different ways to describe the effects of a movie. You can tell about how a movie made you think by using "The movie made me...." or "It struck me that...," as in:

The movie made me think about our world.

The movie made me reconsider my life and how I spend my time.

It struck me that the movie was similar to our world.

The next time you describe a movie, try to do so by answering the following questions:

What is the movie about?

What did the main character think or do?

How did the film affect you?

This is not the only way to describe a film, but it is a useful way to begin a discussion or to make other people interested in the movie.

Let's end this report with homework. Take a film and answer the three questions about it by using some of the structures and words that you learned today. Write us in the comments section of our website, www.51voa.com, or send us an email at learningenglish@voanews.com.

strike – v. to cause (someone) to think about someone or something in a particular way; to be thought of by (someone) suddenly