How to Talk about Music

Update Required To play the media you will need to either update your browser to a recent version or update your Flash plugin.
By John Russell
01 December 2022


Imagine that you hear music on the radio or on your phone. Maybe you like the sounds; maybe you do not.

But how should you describe the music? What kinds of terms and structures should you use in a discussion?

In today's Everyday Grammar, we will explore how you can talk about music. You will learn about sentence patterns, adjectives, and adjectival prepositional phrases. 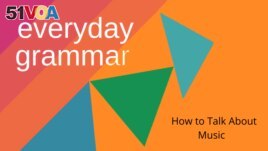 Sentences often fall into patterns – usual, repeated structures. One of the structures commonly used to describe music is as follows:

The subject is "the music," the linking verb is "sounds," and the adjective is "nice."

The adjective is sometimes called the subject complement, meaning it completes the verb and modifies or describes the subject.

Common linking verbs used to describe music include "be" and "sound."

This music is wild!

This music is boring.

In both cases, adjectives such as "wild" or "boring" play an important part in the sentence. They describe how the speaker feels about the music. Some adjectives have a negative meaning. Boring means uninteresting, tiresome. If a person says that the music is boring, they are suggesting that they do not like the music.

We can also describe the effects that music has on us. In this case, we can use adjectives such as "relaxing," "calming," "exciting," "moving," or "touching."

This music is relaxing.

This song is very touching.

Sometimes English speakers replace an adjective with a kind of phrase known as an adjectival prepositional phrase. These phrases – sometimes idiomatic expressions – name or describe something about the subject.

The violin sounds out of tune.

The singer is out of his mind.

The former example – the one about the violin - uses the phrase "out of tune," meaning not having the correct pitch or intonation.

The latter example – the one about the singer – uses the phrase "out of his mind," meaning that the singer has lost control of his mind or went insane.

Choose a linking verb to connect the noun "song" and the adjective "smooth."

This song is smooth.

Now describe a singer's voice by using the expression "out of this world," meaning extremely impressive or enjoyable.

Her voice is out of this world!

His voice is out of this world!

The next time you listen to music, ask yourself the following questions: How would you use what you have learned today to describe the music you are listening to?

Are there other words or structures that you should use to describe the music?

Asking yourself these kinds of questions can improve more than just your English skill. These questions could also deepen your enjoyment of the music itself.

modify – v. grammar: to limit or describe the meaning of (a word or group of words)

touching – adj. having a strong emotional effect : causing feelings of sadness or sympathy

idiomatic – adj. describes an expression that cannot be understood from the meanings of its separate words but that has a separate meaning of its own