How Unusual Is Impeaching a US President?

Update Required To play the media you will need to either update your browser to a recent version or update your Flash plugin.
By Kelly Jean Kelly
06 October, 2019

The move is unusual in American history. Only three out of 44 U.S. presidents have faced impeachment. But so far, none of them has ever been convicted and removed from office. 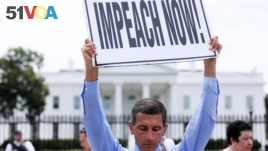 Steve Swanson protests in silence with a sign over his head reading "Impeach Now!" in front of the White House.

The possibility of impeaching top public officials for treason or other high crimes is written in the U.S. Constitution. A majority of delegates to the Constitutional Convention approved the process in 1787. But lawmakers did not first use it against a president until more than 80 years later.

At that time, the country was recovering from a civil war. President Andrew Johnson clashed repeatedly with some members of Congress. They disagreed about civil rights for newly freed slaves, and about how to deal with the southern states that had left the union.

To limit the president's power, Congress passed a rule saying the president could not remove a Cabinet official without the approval of lawmakers. Johnson showed his objection to the rule by dismissing a Cabinet member while Congress was out of session.

Lawmakers answered the move in 1868 by impeaching Johnson for violating the rule. They also noted their disapproval of some of the angry public statements he made. They added charges that he "had brought disgrace and ridicule to the presidency," writes historian Elizabeth Varon of the University of Virginia.

The case went to the Senate for trial. A number of senators were ready to vote to remove Johnson from office. However, the president's lawyers argued that his actions were not really "high crimes." Senators also knew that if Johnson were removed, he would be replaced by a politician many did not like. In the end, they voted to let him keep his job – but only by one vote.

Johnson did not seek another term as president.

For more than a hundred years, the U.S. House of Representatives did not bring impeachment articles against another president.

Then, in 1974, House members charged President Richard Nixon with asking people who worked for him to commit illegal acts. Among them were secret efforts to try to find damaging information about Nixon's opponents. The president was also charged with trying to block the government's investigation into his actions.

For several years during the investigation, many politicians and voters had supported Nixon. The president even won re-election in 1972. But in time, more evidence about Nixon's abuses of power were made public. Lawmakers in his own party decided they could no longer support him. One party leader visited Nixon and warned that, if the case went to trial, more than two-thirds of the senators would vote to convict him.

Nixon decided to resign instead and turn his job over to the vice president. He returned to private life as, in the words of Miller Center researcher Ken Hughes, a broken man. But he later re-entered public life, wrote books and advised later presidents.

In 1998, House members again approved articles of impeachment. This time they were against President Bill Clinton.

The articles charged him with lying under oath about his relationship with a 25-year-old woman who worked at the White House. They also charged him with blocking investigations by interfering with witnesses.

The following year, senators held a trial to decide whether to convict Clinton. His supporters argued that his actions did not harm the country or the government. But critics said his actions challenged the rule of law and so could be considered "high crimes."

In the end, senators' votes were divided about in half – not enough to remove Clinton from office. He completed the remaining two years of his term as a popular president with a majority of voters, even if many thought he was dishonest.

Now, in 2019, lawmakers are launching another impeachment investigation into a president. Leaders in the House have said they will decide by the end of the year whether to issue charges.

convict - v. to prove that someone is guilty of a crime in a court of law

out of session - n. not holding formal meetings (such as a court of law or legislature)

article - n. a separate part of a legal document that deals with a single subject

commit - v. to do something that is illegal or harmful

under oath - n. having made a formal promise to tell the truth in a court of law

challenge - v. to question the action or authority of something