How Will Higher Fuel Prices Affect Different Parts of the World?

Update Required To play the media you will need to either update your browser to a recent version or update your Flash plugin.
By Mario Ritter Jr.
24 October 2021


Reports of higher energy costs are causing concern around the world as pressure increases on businesses and people who buy goods and services.

The biggest shortage, the Associated Press reports, is a lack of natural gas in Europe. European countries import 90 percent of their supply. Much of it comes from Russia. European prices have increased by five times since the start of the year.

Experts blame several events for the gas shortage. They say demand increased after coronavirus restrictions were lifted. They say the past cold winter reduced reserves. And the summer was less windy than usual, so less wind energy was generated.

Europe's chief supplier, Russia's Gazprom, held back extra gas supplies during the summer to build up supplies in Russia. In addition to that, China's electricity demand has come back after the COVID-19 pandemic. China has bought up limited supplies of liquid natural gas, which is transported by ship, not pipeline. There also are limited plants to export natural gas from the United States.

It is difficult to say how long higher fossil fuel prices will last, said Claudia Kemfert. She is an energy expert at the German Institute for Economic Research in Berlin.

"The long-term answer that has to be taken out of this is to invest in renewables and energy saving," she said. Renewable energy comes from the wind and sun.

However, some gas-dependent European industries are cutting back on manufacturing products. German chemical companies BASF and SKW Piesteritz have cut the production of ammonia, an important part of fertilizer.

That caused a problem for Hermann Greif, a farmer in Germany's area of southern Bavaria. He said he could not buy fertilizer for his crops.

"There's no product, no price, not even a contract," he said. "It's a situation we've never seen before." He said the situation might result in a smaller crop in the coming year.

High energy prices already were hitting German farmers, who need diesel fuel to operate machinery and to keep animals warm, said Greif. He grows corn to make biofuel, or fuel made from crops.

People in the northern part of the world are expected to face higher costs for heating this winter. That includes in the United States, where officials have warned home heating prices could rise as much as 54 percent. 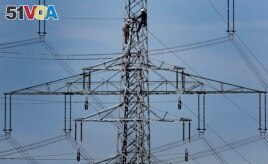 Much depends on the weather. Europe's gas reserves are usually rebuilt over the summer. But now they are at unusually low levels.

"A cold winter in both Europe and Asia would risk European storage levels dropping to zero," says Massimo Di Odoardo. He is with the research business Wood Mackenzie.

That would leave Europe dependent on additional natural gas from a new Russian pipeline or on Russia sending more gas through pipelines in Ukraine. The new Nord Stream 2 pipeline beneath the Baltic Sea has not been approved in Europe. It may not begin operations until next year.

Kemfert in Berlin said Russian suppliers' decision to sell less gas on the open market shows they want "to put pressure on the early certification of Nord Stream 2."

In China, power cuts have followed increased prices for coal and gas. Electric companies in some parts of the country are limiting electricity. Factories in Jiangsu province and Zhejiang in the southeast temporarily shut down in mid-September. That could affect export suppliers.

Chenchen Jewelry Factory is in Dongyang, a city in Zhejiang. The factory faced power cuts over 10 days, general manager Joanna Lan said. The factory makes hairbands, paper products and gifts. Eighty to 90 percent of its goods are for export to the U.S., Europe and other markets. Orders were delayed "by at least a week," Lan said. "We had to buy generators."

The biggest city in the northeast, Shenyang, turned off streetlights and elevators and cut power to restaurants and shops a few hours a day.

Jenny Yang is an energy market expert at IHS Markit. She said China's gas imports have jumped. However, increasing demand in Japan, South Korea and Taiwan also has helped push up prices around the world.

In Brazil, higher gas and oil prices are a problem because a lack of rain has made hydroelectric dams less productive. That has made electricity more costly.

Rosa Benta is a 67-year-old from Sao Paulo. She fears she will no longer be able to provide for her unemployed family members.

"Several times, (energy company) Enel called me saying I had debt. I told them: ‘I'm not going to stop feeding my son to pay you,'" Benta said. "If they want to cut the electricity, they can come."

The Associated Press reported this story. Mario Ritter Jr. adapted it for VOA Learning English. Susan Shand was the editor.

reserves –n. a supply of something that is stored so that it can be used at a later time

fossil fuels –n.(pl.) fuels (coal, oil, natural gas) which are formed in the Earth from dead plant and animal matter

insurance –n. protection from bad things that may happen in the future

certification -–n. official approval to do something legally

elevator –n. a machine used for carrying people and things to different levels in a building