How Will the Philippines’ Next President Lead?

Update Required To play the media you will need to either update your browser to a recent version or update your Flash plugin.
By Caty Weaver
11 May 2022

The apparent win is raising concerns about further erosion of democracy in Asia. Critics say it could harm American efforts to reduce Chinese influence and power in the Pacific Ocean area.

An unofficial count of ballots shows Marcos Jr. received at least 31 million votes. His vice-presidential running mate, Sara Duterte, also won in what appears to be a big victory. 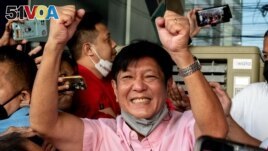 If the results are confirmed, the two will take office at the end of June for a single, six-year term. Marcos will replace Sara Duterte's father, Rodrigo.

President Duterte has sought closer ties with China and Russia during his rule. He has also expressed sharp criticism of the United States. He is very popular in the Philippines with a 67 percent public approval rating.

Andrea Chloe Wong is a Manila-based former researcher in the Philippine Department of Foreign Affairs. She said future relations between the U.S. and the Philippines will have a lot to do with how President Joe Biden's administration responds to the return to power of a Marcos family member.

Biden has to consider geostrategic interests in the Philippines, she said. But he also "has to balance promoting American democratic ideals and human rights."

Marcos Jr. is the son of former President Ferdinand Marcos. He ruled the Philippines from 1965 until a military overthrow in 1986. For most of his presidency, he was supported by the military and widely considered a dictator.

The United States has a long history with the Philippines. It was an American colony for most of the early 20th century before gaining independence in 1946.

The U.S. history with the Marcos family could also add to the complexity of its relations with the Philippines. The U.S. supported administrations that took power after former president Marcos was ousted.

And in 2011, a U.S. District Court ruling in Hawaii found Marcos Jr. and his mother violated a legal order. They had refused to provide the court with information on their wealth. The order was connected to a large 1995 human rights case against Marcos Sr. He died in Hawaii in 1989.

The court fined Marcos Jr. and his mother $353.6 million, which has never been paid.

U.S. relations with President Rodrigo Duterte are complex as well. He is under international investigation in connection to his government's severe campaign against illegal drugs. He is accused of ordering or permitting thousands of killings during his rule.

The U.S. noted the shared history of the two countries in its comments on the election.

State Department official Ned Price told reporters, "We look forward to renewing our special partnership and to working with the next administration on key human rights and regional priorities."

Caty Weaver adapted this story for VOA Learning English from reports by VOANews, The Associated Press and Reuters.

erosion –n. the slow process by which something is worn away

respond –v. to give an answer to

geostrategic –adj. having to do with the long-term plan involving several nations in a part of the world

promote –v. to support or helping something happen

recipe –n. a set of instructions to make something

regional –adj. relating to a particular part of the world

priorities –n. (often pl.) things that are most important to people