Update Required To play the media you will need to either update your browser to a recent version or update your Flash plugin.
By Faith Pirlo
27 July 2022


A large and very rare pink diamond has been found in the African country of Angola.

The pink diamond weighs 170 carats. A carat is a weight measurement used only with some valuable minerals. It is equal to 200 milligrams. The diamond is said to be one of the largest gemstones found in 300 years.

The gem even has a name. It is called "Lulo Rose." The mine owner, Lucapa Diamond Company, said on their website that it was found in the Lulo alluvial diamond mine. Alluvial mines are near or in riverbeds. 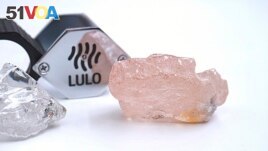 The chief of Lucapa, Stephan Wetherall, told the Associated Press, "Only one in 10,000 diamonds is colored pink. So, you're certainly looking at a very rare article when you find a very large pink diamond."

Wetherall also said that he does not know how much someone will pay for this diamond because of its color, but the value is expected to be very high.

The Lucapa company searches for underground rock formations called "kimberlite pipes." This is known to be a main source of diamonds, said Wetherall.

He said, "We're looking for the kimberlite pipes that brought these diamonds to the surface. When you find these high-value large diamonds ... it certainly elevates the excitement from our perspective in our hunt for the primary source."

The Lulo mine, which employs around 400 people, has already found two of the largest diamonds ever found in Angola. This includes a 404-carat clear diamond, Wetherall said.

Lucapa said the newest pink gemstone is the fifth largest found at the mine.

Angolan mines are one of the world's top 10 producers of diamonds. The company Sodiam, an Angolan state diamond marketer, will sell the pink diamond by international tender.

Diamantino Azevedo is Angola's natural resource minister. He reportedly said, the "pink diamond recovered from Lulo continues to showcase Angola as an important player on the world stage for diamond mining..." His comments were found on the Lucapa website.

Although the pink diamond is very large and rare, there are a number of much larger clear diamonds.

A diamond called the Cullinan, found in South Africa in 1905, weighs 3,106 carats. It is in the scepter of Queen Elizabeth II of England.

Nqobil Ntshangase wrote this article for The Associated Press. Faith Pirlo adapted it for Learning English.

gemstone – n. a stone that can be used in jewelry when it is cut and polished

elevate – v. to raise someone or something to a higher rank or level

perspective — n. a way of thinking about and understanding something

tender – n. an offer or proposal made for acceptance, like a contract