Update Required To play the media you will need to either update your browser to a recent version or update your Flash plugin.
By VOA
10 April 2022


People without a lot of outdoor space sometimes grow a garden in containers such as raised beds. They refill the containers each year with several bags of nutrient-rich soil and compost that they purchase.

But there is another way to provide soil for small gardens. The method is called "Hugelkultur." The idea is that nature should be left to do its own thing with as little human interference as possible. 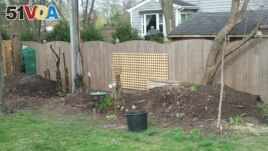 The process involves letting large pieces of trees and plants decompose and turn into nutrient-rich soil, just as they would on a forest floor. The resulting soil is arguably better than anything that you can buy at a garden store.

Hugelkultur can be used in raised beds or in mounds directly on the ground.

Here is how it works:

Instead of filling deep raised beds with purchased soil and compost, fill them with yard waste. This reduces the amount of soil needed and increases nutrients and plant growth.

Start by building up about 40 percent of the depth of your container with a layer of old logs. The logs should from come hardwood trees like maple, oak, poplar or birch. Softwoods from evergreens are also acceptable but they decompose more quickly. Do not use wood from redwood trees or black locusts because they are decay-resistant. Wood from trees like the black walnut release matter that prevents growth and should be avoided, too.

Cover the logs with smaller pieces of wood, like fallen branches, twigs and sticks. These make up the next 10 percent of depth.

Next, add a layer of leaves and other soft plant remains, plus pieces of fruit, vegetables and eggshells that are left over from your own food. Make sure these fresh foods fill spaces in the woody layer under them. Then, water the layer well.

Finally, add a layer of compost and a layer of topsoil in equal amounts. Water each layer as you add it.

If you are making a free-standing mound, decide how big you would like it to be. Dig a trench in the ground that is about 30 centimeters deep. Fill the trench with logs and cover it with a layer of twigs, sticks and branches.

Cover the woody layers with upside-down sections of the removed ground. Cover that with kitchen leftovers, compost and topsoil. Aim for a mound that is wider at its base than its top.

As the organic matter in Hugelkultur beds breaks down, the height of the mound will sink. Simply add compost as needed. The breakdown will warm the soil and create air flow. It also will greatly reduce the need for irrigation, and provide plants with a long-term supply of nutrients.

Soil in Hugelkultur beds, or mounds, can increase harvests and create larger plants for up to 20 years.

compost - n. a decayed mixture of plants (such as leaves and grass) that is used to improve the soil in a garden

decompose - v. to cause something (such as dead plants and the bodies of dead animals) to be slowly destroyed and broken down by natural processes, chemicals, etc.

layer - n. an amount of something that is spread over an area

yard - n. an outdoor area that is next to a house and is usually covered by grass

mound - n. a small hill or pile of dirt or stones