Update Required To play the media you will need to either update your browser to a recent version or update your Flash plugin.
By Hai Do
28 September, 2017

Hefner died of natural causes at his home surrounded by family on Wednesday, Playboy said in a statement.

Hefner launched the magazine in 1953. The very first Playboy had photographs of actress and model Marilyn Monroe. The pictures showed her wearing no clothing. The magazine also published an editorial that promised readers "humor, sophistication and spice."

Within five years, Hefner's company was selling 1 million copies of Playboy every month. By the 1970s, the magazine had more than 7 million readers.

Hefner and his company became known worldwide and their success persuaded many others to follow. In 1992, when asked by The New York Times of what was his biggest success, he said: "That I changed attitudes toward sex."

As more magazines and other media became available on the internet, Playboy's circulation numbers dropped. In 2015, Playboy stopped publishing images of naked women, but overturned that decision earlier this year.

Hefner as the symbol of Playboy lifestyle

Hugh Hefner was an ongoing advertisement for his magazine and other Playboy products. Photos often showed him wearing silk pajamas and smoking a pipe. Hefner was known for holding wild parties for well-known personalities at his Los Angeles home, called the Playboy mansion.

Hefner claimed to have had sex with more than 1,000 women, including many pictured in Playboy.

In addition to the magazine, Hefner also appeared in television shows and opened Playboy Clubs around the world. Those clubs were known for their waitresses. The women were required to wear bunny ears and fluffy white bunny tails.

Many countries took steps to restrict sales of Playboy. The magazine has been banned in China, India, Saudi Arabia and Ireland.

In the United States, some stores refused to sell the magazine, while others kept it out of reach of children. Many American conservatives and women's activists objected to Hefner and Playboy. They said it made pornography seem important and also devalued women. But some actresses chose to appear naked in the magazine. They include Drew Barrymore, Farrah Fawcett and Linda Evans. 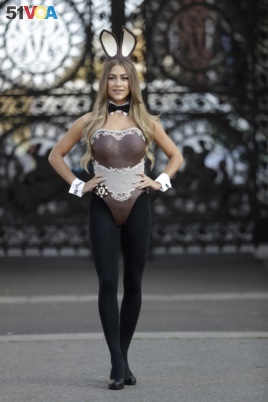 Bunny Penny, the Playboy Club Bunny of the Year, wearing an Easter-themed edible chocolate corset and bunny ears poses for photographers during a photocall next to the Marble Arch landmark in London, Thursday, April 6, 2017

The women who appeared in Playboy's photos are known as Bunnies. Several bunnies became famous, including singer Deborah Harry and model Lauren Hutton.

American men often joked that they bought the magazine for its stories. But there is some truth to the statement.

In the 1970s, then-presidential candidate Jimmy Carter admitted in Playboy that he had "committed adultery" in his heart. John Lennon spoke to the magazine in 1980, not long before he was murdered. In 1990, Playboy published a story about a young businessman with a taste for politics: Donald Trump.

The Playboy Club also influenced American culture. Comedians George Carlin, Rich Little, Mark Russell, Dick Gregory and Redd Foxx performed at the club. The last of the Playboy clubs closed in 1988, when Hefner said they were "passe" and "too tame for the times."

Hugh Hefner was born in Chicago on April 9, 1926. His parents were Christian. Hefner said his parents never showed "love in a physical or emotional way." He told The Associated Press in 2011, "My folks are Puritan. My folks are prohibitionists. There was no drinking in my home. No discussion of sex. And I think I saw the hurtful and hypocritical side of that from very early on."

Hefner married his first wife Mildred Williams in 1949. Their marriage ended in 1958.

Playboy has not announced funeral plans. But Hefner owned space in a Los Angeles cemetery close to the remains of Marilyn Monroe.

The Associated Press reported this story. Hai Do adapted the report for VOA Learning English. George Grow was the editor.

sophistication - n. experience and knowledge about the world, culture, art and literature

spice - n. something that adds interest or excitement

attitude - n. the way you think and feel about someone or something

naked - adj. not wearing any clothes

interview - n. a meeting between a reporter and another person in order to get information

adultery - n. sex between a married person and someone who is not that person's wife or husband

cemetery - n. a place where dead people are buried.