Update Required To play the media you will need to either update your browser to a recent version or update your Flash plugin.
By Anne Ball
02 November, 2017


Chinese artist and activist Ai Weiwei has produced a film documentary about refugees around the world.

He filmed a total of 40 refugee camps in 23 countries. The documentary tells about people who fled war and environmental crises. Others left their home country for religious reasons.

The goal of the new film is to show how the refugee crisis affects everyone. This is just one of the many voices heard in the film:

"Being a refugee is much more than a political status. It is the most pervasive kind of cruelty that can be exercised against a human being. You are forcibly robbing this human being of all aspects that would make human life not just tolerable but meaningful in many ways."

The documentary is called "Human Flow." It says over 65 million people in the world today have been forced to leave their homes. Ai Weiwei used drone aircraft to film the movement of refugees. He and his crew equipped the drones with cameras to get pictures of those displaced from up high.

Ai spoke with VOA about his project.

"Human flow has always happens in human history. It's in many cases, it's part of our humanity and our civilization."

But things are different now, he notes. Ai Weiwei says countries are working to stop the flow of people by preventing refugees from crossing borders. After a very difficult trip by sea and days of walking, many refugees from the Middle East made their way to northern Greece. But then they were stopped at the border with Macedonia.

"Over 70 borders have built up their fences and walls and have forbidden any refugee to pass through. So, by doing that, they really not only stopped the life line of those refugees to try to find a safe place, even just temporarily across the border and go to another location, but also putting them in extreme dangerous conditions."

In part of the film, a doctor examines a baby. He says it is a bad situation.

"Two months old, and born here but he didn't have any vaccination. No showering facilities. The hygienic situation is very bad." 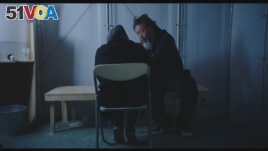 The documentary looks at the refugee crisis in some areas, as well as the personal stories of those suffering. Like one man who holds up photographs of family members who died at sea.

"Human Flow" shows large numbers of people fleeing wars, religious persecution, and environmental disasters. Ai Weiwei says we need to save those people from displacement. If we do not, he warns, generations will be born without identity, or the possibility of a better life. He believes that will make them targets for extremists.

"And those people, those child[ren}, when they grow up they only see how their parents being badly treated, unfairly treated, the world watching but doing nothing. They see people being killed, homes being burned, the drones throw the bombs and kill, blindly kill all the people. And what kind of image would remain in their mind?"

The Chinese activist is critical of Europe and the United States for lacking empathy, leadership and ideas about the refugee issue. He warns that if this does not change, no one's future will be safe.

Penelope Poulou wrote this story for VOANews. Anne Ball adapted her story for Learning English. George Grow was the editor. We want to hear from you. Write to us in the Comments Section and visit us on 51VOA.COM.

persecution – n. the act of continually treating in a cruel and harmful way

pervasive – adj. existing in every part of something : spreading to all parts of something

tolerable – adj. good enough to be accepted but not very good

hygienic – adj. relating to being clean and to the things that are done to maintain good health

empathy – n. the feeling that you understand and share another person's experiences and emotions