Update Required To play the media you will need to either update your browser to a recent version or update your Flash plugin.
By Ashley Thompson
03 October, 2014


Human Rights Watch has warned that Turkey is becoming more authoritarian. The group says the rule of law is slowly breaking down under Turkish President Recep Tayyip Erdogan. And it accuses him of launching a campaign against opponents and media freedom.

Human Rights Watch says Mr. Erdogan and his ruling Justice and Development Party are taking steps to control the media and the Internet. It also claims they are clamping down on those who are critical of the government.

Emma Sinclair Webb studies Turkey for Human Rights Watch. She also wrote the group's new report on the country. She says the changes there are very concerning.

"Basically over the last year, we've seen the Turkish government respond to political opposition with an extremely heavy-handed approach, which basically is willing to sacrifice the rule of law, to erode judicial independence and to really tear up the rule book and wield the stick against political oppositionists."

The report says the human rights situation in Turkey has worsened since nationwide anti-government protests last year. The protests were directed at Mr. Erdogan, who was then prime minister. He was elected president in August.

Emma Sinclair Webb says that, since the unrest, there have been more restrictions on the media and the Internet, and stronger punishments for protesters. 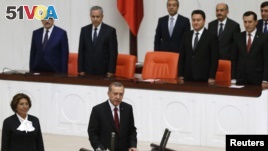 In this file photo, Turkey's new President Tayyip Erdogan (front C) attends a swearing in ceremony at the parliament in Ankara, August 28, 2014.

"Then there are some very serious prosecutions of protesters, for even attempting a coup against the government. They face a possible life imprisonment. So you've got still with the crackdown against the Gezi protesters continuing, a year on, and very little justice for those who were victims of the massive police violence during Gezi protests."

The report also says Turkey's government has weakened the rule of law -- the belief that laws, not individual officials, should govern a nation.

Emma Sinclair Webb says the government wants to have control of judiciary powers -- the courts and judges.

"And they basically have shown signs of wanting to have prosecutors and judges who simply do the government's bidding and simply act according to the government's interests. Once you start creating a judiciary that does that you lose all independence of the judiciary, and you fundamentally undermine the rule of law."

Human Rights Watch did praise the Turkish government for its efforts to end the 30-year conflict with the Kurdish rebel group, the PKK. It also says government reforms have given minorities in the country greater rights. But it is calling for the release of the many non-violent Kurdish political activists who have been jailed for many years.

*This report was based on a story from reporter Dorian Jones in Istanbul. Ashley Thompson wrote it for Learning English. George Grow was the editor.

clamp down - v. to prevent something, typically in a harsh way

rebel - n. a person who rises in opposition of an established government.