Update Required To play the media you will need to either update your browser to a recent version or update your Flash plugin.
By Mario Ritter
02 June, 2018


Activists are worried about human trafficking in Nigeria's camps for internally displaced persons.

Mitika Ali works for Nigeria's anti-trafficking agency, known as NAPTIP. He confirmed that human trafficking is taking place at camps in Maiduguri, the largest city in Borno State.

"People come there in the evening for recruiting, I can say, taking young girls, going away with them. I see it as they are going there for sexual exploitation," said Ali.

Ali says many women and girls living in the camps will be taken away from Borno state because of human trafficking.

Philip Obaji Jr. and Yusuf Mohammed Ciroma are activists. They started a campaign called "Up Against Trafficking" in April. The two men want the Nigerian government to know how big the problem is. They also want camps for the internally displaced to warn about the dangers of traffickers who make false promises of employment.

Ciroma told VOA, "So they will carry them out, and they will not even give them jobs. Then they will start selling them like slaves."

He said a woman named Ya Batu Bukar told him about her experience. She said she was taken from Maiduguri to Niger, where she was left with no food or money.

Bukar told him, "I don't want another woman here to pass through the same pain, and that is why I am part of this campaign."

The extremist group Boko Haram formed in Maiduguri in 2002. Seven years later the group launched a war against the government. An estimated 30,000 people have been killed in the fighting.

In addition, more than two million people have left their homes to escape from Boko Haram forces. Many have come to Maiduguri to live in crowded camps.

Ali told VOA that NAPTIP's leadership has not received official reports of trafficking in the camps. But, he said, it is done secretly.

At least 200 women have joined "Up Against Trafficking."

Nana Abdullahi is one of them. She is an orphan. She left the city of Bama in Borno State after Boko Haram fighters entered the area.

As a 15-year-old, she sold goods on the streets of Maiduguri to earn money. One day a man said he could help her.

She thought that she would be going to a place like Kano, in northern Nigeria, to get a job. But, she told VOA, he took her to Niger.

Human trafficking is common in Nigeria, which is Africa's most populous nation. Those familiar with the issue say that traffickers have tried to lure Nigerians to other countries for many years. Thousands of these people end up in European or American cities in detention centers.

In recent months, there have been reports of poor treatment of Nigerians trafficked to Libya. 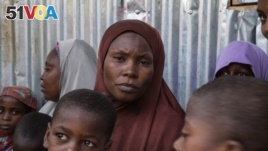 Maryam Haruna was smuggled into Saudi Arabia where she worked for two years before Saudi authorities deported her to Nigeria. She said she wants to go back.

Many people accuse the Nigerian government of not doing enough to stop the problem.

In 2017, a U.S. State Department report said Nigeria must do more on the issue. It said, "The government of Nigeria does not fully meet the minimum standards for the elimination of trafficking, however, it is making significant efforts to do so."

Ali told VOA that his team is working hard.

NAPTIP officers give out information to people living in the camps, but unofficial camps are often missed.

Maryam Haruna lives in a one of the unofficial camps in Maiduguri.

The 35-year-old mother said she gave birth to two children a few years ago but did not have enough money. She said then a man offered her a job. She immediately accepted the position, although she did not know where it was.

She was then smuggled into Saudi Arabia and worked there for two years as a housekeeper. She had to pay back her smuggler for the trip to Saudi Arabia.

She grew used to the work and was unhappy when it ended.

"Unfortunately, one day when I was coming back from work, I got caught and deported back home," she said.

Haruna said she wants to go back because life there as an illegal immigrant was better than life living as a displaced person in Nigeria.

recruit – v. to persuade on get someone to join some activity

exploitation – n. to use someone or something in a way the helps you unfairly

lure – v. to get someone to go somewhere or do something by offering something that they want

elimination – n. the act of ending something

internally – adj. involving the inside of something