Update Required To play the media you will need to either update your browser to a recent version or update your Flash plugin.
By Dan Novak
19 June 2022


Although Russia's war in Ukraine is not a laughing matter, Ukrainians are learning to laugh about it anyway. Not because they want to. But because laughter can be like a medicine.

Serhiy Lipko will soon be sent to the battlefields of Ukraine. But he has also been working as a comic, a performer who tells jokes to make people laugh. At a comedy club in Kyiv, he took the stage wearing army fatigues. He joked that military training with NATO instructors has been a great chance to work his English. He also joked about how nervous he had been about using costly military equipment. He was afraid of breaking it.

Russian President Vladimir Putin and his troops are favorite targets of dark Ukrainian wartime humor. But there are also things they will not joke about. Ukrainian dead are not laughed about nor are the worst battles like Mariupol. The same is true of war crimes. 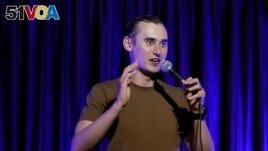 "Tragedies cannot and will never be the object of humor," said Anastasia Zukhvala. She is Lipko's wife who also works as a comic.

"This is an absolutely crazy time, beyond ordinary experience," she said. "Our life now is made of paradoxes, and it can even be funny."

Ukraine's most famous comedian is Volodymyr Zelenskyy, now the country's president. He was elected in 2019. Before that, Zelenskyy played a high school teacher who accidentally becomes president in the TV comedy series Servant of the People. But Zelenskyy has not had much cause for comedy since the February 24 invasion.

While he works to build international support and soldiers fight, Ukrainians away from the frontlines are using jokes and humor as weapons. It is used as a medicine against war-time anxiety and sadness.

Twenty-nine-year-old Yuliia Shytko said she felt in far better spirits after laughing with the rest of the crowd through Lipko and other comedians' performances. Most of their jokes were about the war.

"Laughing and stuff, that's how you cope," Shytko said.

Lipko and Zelenskyy crossed paths in comedy before the war. The future president, then still a performer, was a judge in 2016 on the TV game show, Make a Comedian Laugh. Lipko was a competitor.

Lipko is still joking about life in the army, even as he prepares to travel to the frontlines. His nickname in the army is "the comedian." He joked that some things his fellow soldiers say and do are so funny that he has to use them for his show.

Afterward, he said his comedy should help him during battle.

But he has worries of his own. He has been trying to get his parents to leave their village in the south. He believes it is too close to the fighting. But they are laughing off the danger. His mother joked that should Russian missiles appear in her potato field, that would save her a lot of work.

"My mother never joked before the war," Lipko said. "They use my weapons against me ... and that's unfair."

paradox — n. a situation that is made up of two opposite things and that seems impossible but is actually true or possible

cope — v. to deal with problems and difficult situations and try to come up with solutions

nickname — n. a name that is different from a person's real name but is used by friends and family