Update Required To play the media you will need to either update your browser to a recent version or update your Flash plugin.
By Caty Weaver
06 January, 2016


Hundreds of children in American military families are sexually abused each year, reports the Associated Press.

The Defense Department confirmed at least 1,584 cases of sexual abuse against military dependents over four years ending in 2014. 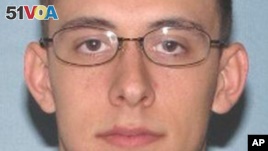 The second-largest group of abusers were family members of the victims. There were 332 cases.

The victims were overwhelmingly female.

As many as 160 more cases of sexual abuse could have happened during the 2010 to 2014 period. But the data were not completely clear. These cases could involve a child who was victimized multiple times or by a repeat abuser.

The numbers only include cases involving military dependents, which are the only child victims the department tracks.

A lack of transparency in military courts blocks a clear picture of child sex abuse, says the AP. More than 1 million children are offspring of service members. The known number of cases appears statistically small, the report says.

The Defense Department did not release the complete report. It did not include the age of offenders or victims, or where the assaults happened.

Officials also omitted the branch of service where the sexual abuse occurred. The Defense Department said it avoided identifying and "re-victimizing" the abused.

It is unclear how many of the assaults resulted in legal action. The cases were based on reports to the Defense Department's Family Advocacy Program. It does not track legal action, the department said.

An AP investigation published in November found that more people are jailed for child sex crime than any other offense in the military. But the military justice system keeps much of its work secret.

Three Democratic Party senators have reacted publicly to the AP report. They urged Defense Secretary Ash Carter to end secrecy in the military justice system. They demanded that documents from sex crimes trials be more open and available.

The senators also raised concern in a letter they wrote to Carter last month. They said they were worried that the Defense Department's yearly report to Congress does not accurately count military sex crimes because it does not include those against children.

Caty Weaver adapted this story for VOA Learning English from an Associated Press report. Kathleen Struck was the editor.

What do you think about the abuse of U.S. military children? Let us know in the Comments Section or on 51VOA.COM.

assault – v. to violently attack (someone or something)

enlisted – adj. serving in the armed forces in a rank below the rank of officers

transparency – n. openness; the quality that makes something obvious or easy to understand

duplication – n. the state of containing copies of something or being a copy of something