Update Required To play the media you will need to either update your browser to a recent version or update your Flash plugin.
By VOA
19 January, 2015
51VOA听写整理，转载请注明出处。文本仅供参考，欢迎纠错！

From VOA Learning English, this is the Environment and Science Report.

Recent studies suggest the African nation of Burundi has the highest levels of hunger and undernourished people worldwide. More than ten years of war, along with poverty and overpopulation have strongly affected the nation's economic and nutritional conditions. Continued rising demands for limited resources create serious problems for Burundi.

Along many of the hillsides in Burundi's northern Ngozi province, workers are digging and planting. They hope to stop fertile soils from sliding away in what is considered the hungriest place on earth. 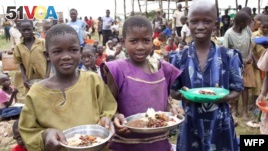 The United Nations World Food Program is currently paying more than 5,700 local farmers to work other people's lands. The WFP program, Food-for-assets comes after years of local farmers trying and failing to beat hunger by working their own land.

The Burundian civil war ended in 2005 after twelve years of fighting. The conflict left much fertile land unattended. Some also was repossessed. Overpopulation in the country has also increased pressure on food production.

Jean-Dominique Masumbuko is a Agricultural Coordinator for the Christian aid group World Vision. He says the people show no sign of physical strength. He says they appear almost bloodless.

At a nearby clinic, crying babies, older children and underweight mothers fill the room. Some of the children are already in a World Food Program effort that feeds extremely underweight children and breastfeeding mothers.

Pascaline Minani, has a 6-year-old son in the program. She walked five kilometers carrying her baby to get to the center. She is seeking supplements to improve her breast milk. She worries that without supplements her baby might suffer severe hunger.

But WFP workers find that Minani's measurements do not meet the requirement. She is not underweight enough to receive the supplements.

Pascaline Minani says she cannot stop thinking about food. She says her only wish is to feed her children once a day, and if there is more, she will feed herself.

And that's the VOA Environment and Science Report.