Hunters Look for Nazi Treasure in the Netherlands

Update Required To play the media you will need to either update your browser to a recent version or update your Flash plugin.
By Dan Friedell
09 January 2023


Treasure hunters walked with digging tools and metal detectors through the fields of Ommeren in eastern Netherlands last week.

They were looking for gold and jewels that Nazi soldiers reportedly buried during World War II.

The Dutch National Archive released a 77-year-old Nazi map last week. Officials said the map was believed to show where soldiers had hidden four boxes of valuable jewels and metals. The men had stolen them after a bank explosion in 1944, the Archive said. 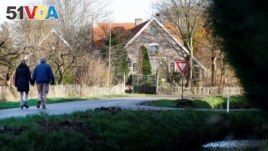 Some people believe the objects may be worth millions of dollars.

Dutch officials took the map from a German soldier after the Netherlands was freed from Nazi occupation in 1945.

The map was protected for 75 years before it was required to be shown to the public.

The Archive said it looked for the treasure several times in 1947 but did not find anything.

Anne-Marieke Samson is an Archive spokesperson. She said the organization researched the story and found it to be "reliable." However, she said it is also possible there was never a treasure, or that it had been removed before the Archive searched.

The possibility of treasure proved impossible to resist for 57-year-old Jan Henzen. He was one of many, armed with tools, searching the area.

"Like a lot of people, the news about the treasure made me go look for myself. The chance of the treasure still being here after 70 years is very small I think, but I want to give it a try," he said.

The former mayor of Ommeren is Klaas Tammes. He runs an organization that owns the land where people are looking.

He said he has seen hunters come from all parts of the country.

"A map with a row of three trees and a red cross marking a spot where a treasure should be hidden sparks the imagination," he said.

"Anyone who finds anything will have to report it to us, so we'll see," Tammes said, adding, "But I wouldn't expect it to be easy."

map –n. a picture or chart that shows the location of cities and land features such as rivers or lakes

box –n. a container where items can be held

metal detector –n. a tool that an operator carries over the ground to see if a metal item is below the surface

reliable –adj. able to be counted on, something that is thought to be correct

spark –v. to cause something to happen, to inspire someone or something