Ocean Storms Can Cause Great Damage

Update Required To play the media you will need to either update your browser to a recent version or update your Flash plugin.
By Jerilyn Watson
09 September, 2013

From VOA Learning English, this is Science in the News. I'm Mario Ritter.

Hurricane Sandy brought death and destruction to the eastern United States last October. Today rebuilding efforts are still in progress in some areas.

Sandy was one of the country's deadliest hurricanes. It also was the second most costly in American history.

The storm kept hitting coastal states for a week. It caused major destruction in New Jersey and New York.

Estimates of the number of dead from the storm differ. But as a hurricane and what is called a post-tropical cyclone, Sandy was said to be directly responsible for at least 117 deaths in the United States. It also was blamed for 69 other deaths in Canada and the Caribbean Sea.

Some experts have linked other deaths to the storm. People died of the cold because of loss of power in their homes – or loss of their homes. Others died in accidents while cleaning up the damage. Or, they suffered carbon-monoxide poisoning.

Sandy began as a tropical depression off the coast of Africa. At first, it produced rain and thunderstorms in the eastern Atlantic Ocean. By October 18th, it arrived in the Caribbean Sea. The storm weakened as it passed over Cuba. But it grew stronger as it moved toward the United States on October 27th.

Scientists say the hurricane joined with another weather system arriving from the west. The combined storms caused water levels to rise all along the east coast. Winds with speeds of over 65 kilometers an hour stretched 1,500 kilometers from side to side.

Sandy struck southern New Jersey before it began moving inland across the North American mainland. Some lives were changed forever along the coastlines of New Jersey, New York and other states.


How Do You Name a Hurricane?

How did Hurricane Sandy get its name? Naming storms and other natural events has been a tradition for centuries. For example, the name "Thor" was given to the mythical Norse god of thunder, the loud sound that follows lightning in the sky.

An Australian scientist began calling storms by women's names before the end of the 19th century. During World War Two, scientists called storms by the names of their wives or girlfriends.

American weather experts started to use women's names for storms in 1953. In 1979, they began to use men's names, too.

Scientists choose the names of storms many years before they are used. They decide on them at meetings of the World Meteorological Organization. The National Hurricane Center in Miami, Florida has one list for each of six years for Atlantic storms. Its experts name storms when they reach wind speeds of 62 kilometers an hour. That is true even if they never grow stronger.

The first name used in a storm season begins with the letter A. The second begins with B and so on. The letters Q, V, X, Y and Z are never used. And the same list of names is not used again for at least six years. And different lists are used for different parts of the world.

A name is retired when the storm with this name has been very destructive, like Hurricane Katrina in 2005.

That same year, Greek letters had to be used for the first time to name storms in the Atlantic. That was the plan -- to call storms Alpha, Beta and so on -- if there were ever more than 21 named storms in a season. As it happened, there were 28.


How Do Hurricanes Form?

Ocean storms develop when the air temperature in one area is different from the temperature nearby. Warmer air rises, while cooler air falls. These movements create a difference in atmospheric pressure.

If the pressure changes over a large area, winds start to blow in a huge circle. High-pressure air is pulled toward a low-pressure center. Thick clouds form and heavy rains fall as the storm gains speed and moves over the ocean. Storms can get stronger as they move over warm ocean waters. 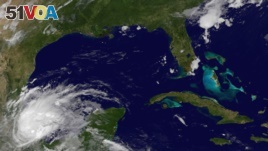 The strongest, fastest winds of a hurricane blow in the area known as the eyewall. It surrounds the center, or eye, of the storm. The eye itself is calm by comparison.

These storms also cause high waves and ocean surges. A surge is a continuous movement of water that may reach as high as six meters or more. The water strikes low coastal areas. Surges are commonly responsible for about 90 percent of all deaths from ocean storms.

The National Hurricane Center in Miami keeps close watch on severe storms. It works with government officials and with radio and television stations to keep people informed. Experts believe this early warning system has helped reduce deaths from ocean storms in recent years.

But sometimes people cannot or will not flee the path of a storm. That is what happened in some parts of Louisiana when Hurricane Katrina struck.

Weather experts use computer programs to create models that show where a storm might go. The programs combine information such as temperatures, wind speed, atmospheric pressure and the amount of water in the atmosphere.

Scientists collect the information with satellites, weather balloons and devices floating in the oceans. They also receive information from ships and passenger airplanes and other flights. Government scientists use specially-equipped planes to fly into and around storms. The crews drop instruments tied to parachutes. The instruments collect information about temperature, pressure and wind speed.

Scientists use the Saffir-Simpson Hurricane Scale to measure the intensity of storms based on wind speed. This provides an idea of the amount of coastal flooding and property damage that might be expected. The scale is divided into five groups or categories.

The mildest hurricane is a category one. A hurricane called "Cat One" has winds of about 120 to 150 kilometers an hour. This storm can damage trees and lightweight structures. It can also cause flooding.

Wind speeds in a category two hurricane can reach close to 180 kilometers an hour. These storms are often powerful enough to break windows or blow the tops off houses.

Winds between about 180 and 250 kilometers an hour represent categories three and four. A more powerful storm is a category five hurricane. At its fiercest point, Hurricane Sandy was called a "Cat Three."

Some scientists believe climate change affects major storms. They say the warming of Earth's atmosphere is already making the storms worse. Other scientists have published studies that dispute this.

In 2010, a special committee of the World Meteorological Organization reported on severe storms. The committee's work appeared in the journal "Nature Geoscience." Ten scientists wrote the report. They represented both sides of the debate about climate change. The scientists reached no clear answer about whether rising temperatures on Earth had already intensified storms. Still, they made some predictions.

The committee said the changing climate might cause more powerful ocean storms in the future. It said the overall strength of storms measured by wind speed might increase two to 11 percent by the year 2100. And there might be an increase in the number of the most severe storms. But there might be fewer weak and moderate storms.

This Science in the News was written by Jerilyn Watson. Our producer was June Simms. I'm Mario Ritter.

And I'm Caty Weaver. Listen again next week for more news about science on the Voice of America.
Related Articles
go top