Update Required To play the media you will need to either update your browser to a recent version or update your Flash plugin.
By Bryan Lynn
11 September, 2017


Hurricane Irma has weakened to a tropical storm after causing widespread damage on Caribbean islands and the U.S. state of Florida.

Irma's winds eased to about 100 kilometers per hour Monday as the storm continued to move on a northwest path, away from Florida. The ocean storm had been the strongest kind of hurricane – a Category 5 – as it moved through the Caribbean area last week. The storm's wind speeds were measured near 300 kilometers per hour at one time.

Weather officials warn that Irma is expected to keep producing high winds and heavy rain, although it has weakened.

Officials in Florida were getting their first look at storm damage in some areas Monday. Irma first hit the islands called the Florida Keys early Sunday, when the storm was at its greatest strength. 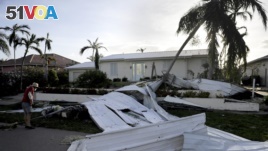 A roof is strewn across a home's lawn as Rick Freedman checks his neighbor's damage from Hurricane Irma in Marco Island, Fla., Sept. 11, 2017.

Severe flooding was reported in many other cities and towns along Florida's Gulf of Mexico coastline. Flooding also was reported in Jacksonville on Florida's eastern Atlantic coast. The storm damaged power lines and some building cranes.

About 6.5 million homes and businesses remained without power across Florida, and officials said it could be weeks before power is restored in all places. An estimated 220,000 people were staying in shelters.

Florida Governor Rick Scott said on Twitter he was joining members of the U.S. Coast Guard to view damage from Irma in the Florida Keys.

No deaths in Florida were immediately linked to the storm. Before hitting Florida, Irma left at least 34 people dead in several island nations.

Ten of those deaths were in Cuba, where severe flooding was reported in several neighborhoods in central Havana. State media reported about 1 million people were evacuated from high-risk flood areas.

In the island nation of Antigua and Barbuda, Prime Minister Gaston Browne said 95 percent of buildings were either destroyed or severely damaged.

The small French island of St. Barthelemy and the French-Dutch island divided between St. Martin and St. Maarten also were badly damaged. The U.S. Virgin Islands, Puerto Rico, the Dominican Republic, Haiti and the Turks and Caicos also suffered damage.

Officials in the Caribbean area are working to help residents reporting shortages of food, water and medicine.

In the U.S. territory of Puerto Rico, more than one million people were left without power after the storm. The U.S. military deployed Navy ships and aircraft and hundreds of Marines to help with recovery efforts in Puerto Rico and the U.S. Virgin Islands.

storm surge – n. rising of the sea level as a result of weather activity during a storm

evacuate – v. to remove people from a dangerous area