Update Required To play the media you will need to either update your browser to a recent version or update your Flash plugin.
By Pete Musto
03 March, 2019


The hurricanes that hit Puerto Rico in 2017 destroyed most of the island's forest cover. The storms may have given scientists ideas about how the world will react to climate change and increasingly severe weather.

Puerto Rico's El Yunque is the only tropical rain forest under the direction of the United States Forest Service. Researchers there are running controlled studies on how plants react to higher temperatures combined with severe weather, starting with Hurricane Maria.

Not far away, another group of researchers is looking at how hurricanes affect the forest environment.

Forest Service researcher Tana Wood leads a team testing how plants themselves react to higher temperatures. The 2017 hurricane season, with Maria following another storm -- Hurricane Irma, has given researchers a chance to see how storms affect the recovery of struggling ecosystems. This is a concern on Caribbean islands, where scientists say rising temperatures could lead to more intense storms.

On a recent trip to the Forest Service research center, Wood moved through thick plant life and plant leaves the size of laptop computers. She made her way to three areas surrounded by infrared panels. The devices raise the air and soil temperature by about 4 degrees Celsius. 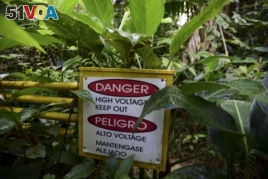 The plants around the research center were shorter and had more of a brown color than the three unheated control areas. The warmed areas operate on 480 volts of electricity. The power lines are separated from the ground, but the scientists wear special footwear to avoid getting shocked in case of an accident.

Nearby, scientist Rob Tunison put what looked like a small mirror around a dark green plant leaf. He spent 30 minutes to an hour working on each leaf.

Wood said they are looking at how soils react and temperatures affect natural processes. One example is photosynthesis, the process through which plants turn sunlight into energy while taking in carbon dioxide and releasing that gas and oxygen into the atmosphere.

The researchers are also studying nutrients and microorganisms in the warmed areas. They freeze some of the nutrients and organisms and send them to a laboratory in California for examination.

Knowledge about plants and soils in tropical areas could eventually be used in models to identify how larger ecosystems react to changes. Wood added that researchers are able to look at the possibility for tropical plants and soils to react to warmer conditions over time.

Tropical forests are important in recovering and reusing carbon dioxide, one of the gasses that studies have linked to slowly rising temperatures in Earth's atmosphere. And such forests store about a third of the world's carbon, Wood said. They also help produce rainfall across the world by releasing water vapor, which in turn creates clouds.

"Anything that happens in these systems can have an effect on the world's climate," she said.

In February, U.S., British and international climate agencies reported that 2018 was the fourth-warmest year on record. Worldwide production of heat-trapping carbon dioxide saw its largest increase in seven years. In all, carbon dioxide emissions worldwide have increased 55 percent in the past 20 years. And the U.S. National Oceanic and Atmospheric Administration reports that Earth has warmed on average about two-thirds of a degree Celsius.

British weather experts noted in February that the world could set record-breaking temperatures over the next five years. Scientists expect the world will produce 37.1 billion metric tons of carbon dioxide this year. Studies from the Global Carbon Project show that is up from 36.2 billion metric tons produced in 2018.

Kim Cobb is a climate scientist at the Georgia Institute of Technology. She was not involved in the experiments at El Yunque. Cobb said she did not know of any other long-term warming experiments in tropical rainforests. And what will happen at the U.S. Forest Service's site is unclear.

"It's not a system that we can model extremely well today, let alone under climate change scenarios," Cobb said. "But there is little doubt that these kinds of long-term monitoring sites are extremely valuable in ... our understanding of the water and carbon cycle, and how they might change with climate change."

The $3 million project is now in its fourth year. Wood said she hopes it will continue as long as possible. Scientists halted the project for a year after Hurricane Maria hit Puerto Rico on September 20, 2017. That way they could separate the effect of warming from the effect of the storm, which caused more than $100 billion in damage.

Not far from Woods' experiment, scientists are looking at how hurricanes affect the tropical forest. They began by cutting away the highest leaves above parts of the forest to recreate the effects of a storm. They paid workers to cut tree branches and spread them across the forest floor. That helped them study how light and water move through the changed ecosystem and the effect that fallen trees have on soil microbes. They also are measuring cloud base heights to get a sense of how changes could affect rainfall.

"It poses a lot of challenges but a lot of opportunities to move the science forward," said Grizelle Gonzalez, a project leader.

The experiments are expected to continue for several years. That is unless new storms move into the Caribbean. Another Atlantic Ocean hurricane season starts June 1.

Danica Coto reported this story for the Associated Press. Pete Musto adapted her story for VOA Learning English. George Grow was the editor.

We want to hear from you. What interesting experiments on the effects of climate are happening in your country? Write to us in the Comments Section or on 51VOA.COM.

tropical – adj. of, relating to, occurring in, or used in the part of the world that is near the equator where the weather is very warm

ecosystem(s) – n. everything that exists in a particular environment

infrared panel(s) – n. a flat device that produces or uses rays of light that cannot be seen and that are longer than rays that produce red light

volt(s) – n. a unit for measuring the force of an electrical current

emission(s) – n. the act of producing or sending out something such as energy or gas from a source

scenario(s) – n. a description of what could possibly happen

monitor(ing) – v. to watch, observe, listen to, or check something for a special purpose over a period of time

opportunities – n. an amount of time or a situation in which something can be done