Storm Season Arrives in the Atlantic

Update Required To play the media you will need to either update your browser to a recent version or update your Flash plugin.
By VOA
25 September, 2013

Hello, again, and welcome. I'm Jim Tedder in Washington. Today we are watching for them. And they most certainly are coming. People sometimes call them monsters. But they are not from a horror movie, or from outer space. They are huge storms that form over the Atlantic Ocean this time of year. We will have the latest information about the scientists who will be studying them.

And then, "I scream, you scream, we all scream for ice cream!" We will visit some ice cream makers to hear how they do it, and what unusual flavors they have discovered.

It's time for more Learning English with As It Is on VOA.

The height of the Atlantic Ocean hurricane season has arrived. More hurricanes are reported at this time of year than during any other period.
The American space agency, NASA, recently announced plans to investigate the storms that form over that Atlantic. So today, we take you to the agency's Goddard Space Flight Center near Washington. To learn about a campaign called the Hurricane and Severe Storm Sentinel mission -- HS3 for short.

Tropical storms and hurricanes can mean a mixture of high winds, huge waves, flooding and destruction. The National Oceanic and Atmospheric Administration says this Atlantic hurricane season probably will be more active than usual. And the memories of Hurricane Sandy are still strong. Last year, that storm killed many people in the United States, Canada and the Caribbean Sea.

NASA is studying storms by taking to the skies above the Atlantic Ocean – in fact, above the storms themselves. Two pilotless Global Hawk aircraft will collect measurements so scientists can learn how hurricanes come into existence.

Scott Braun is a research scientist, a meteorologist, at NASA. He describes the goals of HS3.

"What we're really after, scientifically, is to better understand the relative roles of the environment and those inner-core processes in the formation and intensification of hurricanes in the Atlantic."

Global Hawks can reach a height of almost 20 kilometers. That is about two times as high as a passenger airplane can fly. Special instruments let scientists gather details about storms from high above. The instruments include a device with a long name -- the High Altitude Imaging Wind and Rain Profiler.

The Global Hawks will study the environment near the storms to see how surrounding conditions affect intensity. The airplanes also will collect information about the storms themselves. One plane will deploy dropsounds. These instruments measure temperature, humidity, pressure, wind speed and wind direction from above the storm down to the surface.

NASA says the Global Hawks are loaded with state-of-the-art equipment. Scott Braun notes that there are good points about using aircraft without pilots in this research.

"With the Global Hawks, we can fly for up to about 28 hours, and because all the crew and the scientists are on the ground rather than on the plane, we can swap out (exchange) shifts. And that just means that you can go much farther or stay out over a storm much longer than you can with a manned aircraft."

Researchers will study the information in depth after the project ends. But Mr. Braun says they also plan to do a quick examination and share that information.

The HS3 mission also is investigating something else that researchers have yet to understand. Mr. Braun says in addition to wind speed and wind direction, the researchers want to know more about temperature in the environment. He says that is especially true of something they call the Saharan Air Layer. It is a very hot, dry, dusty air mass that comes from Africa. Scientists are debating whether Sarahan dust provides material for tropical storms – or even suppresses the development of storms.

Ice cream is a frozen treat usually eaten after a meal. It can be found around the world. In Los Angeles, California, some business owners are preparing ice cream that is similar to the desserts of other countries. Onka Dekker spoons out the sweet story for us.

At the Ice Cream Lab in Beverly hills, the frozen dessert is made to order. People watch as the ice cream makers pour a liquid ice cream base into a bowl. The an odorless smoke appears from the mixture. Tommy Ngan and his business partner Joseph Lifschutz make ice cream with liquid nitrogen. Mr. Lifschutz explains.

"It's used as an instant freezer. It kind of touches everything in the bowl and evaporates, which is why you see the whole smoke show."

Mr. Ngan is from Hong Kong, where he learned this method of making the dessert. 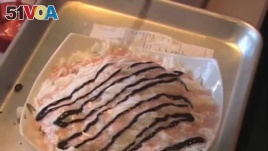 Ice cream is a cold dessert that can be found around the world.
At Blockheads Shavery Company, people do not see smoke. But they do hear the sound of ice cream being made. A block of ice is placed on a machine and then shaved. Supervisor Brian Liang says there are different kinds, or flavors, that include green tea and black sesame.

"We call is snow cream. It's a cross between shaved ice, so it has the light airy texture, and the creamy taste of ice cream. The dessert is actually pretty popular in Taiwan. Basically the owners kind of grew up eating it."

People looking for ice cream with flavors from the Middle East can find it at Mashti Malone's Ice Cream Shop. Iranian American Mashti Shirvani has been making Persian-style ice cream at his store for 34 years.

"I do the old fashioned way when I make any food. I don't measure it. Just my eyes and my hand."

His ice cream creations include ingredients such as ginger, saffron, lavender, orange blossom, and rose water. While many of the flavors are Persian, Mr. Shirvani says his ice cream is not Persian. He explains that in Iran they make ice milk. But he uses cream, which has a higher level of fat.

Even with the differences in what goes into making ice cream, Mr. Shirvani's brother, Mehdi, says ice cream appeals to everyone.

No matter how many flavors of ice cream exist in the world, it seems that people will always create some new version of this popular dessert. I'm Onka Dekker.

I'm Jim Tedder in Washington. There are more Learning English programs straight ahead, and world news at the beginning of the hour on VOA.
Related Articles
go top