Hyundai to Halt Production Because of Coronavirus Outbreak

Update Required To play the media you will need to either update your browser to a recent version or update your Flash plugin.
By Susan Shand
04 February 2020


Hyundai Motor says it will suspend production in South Korea because of the coronavirus outbreak, which has affected the supply of parts.

In announcing the suspension, Hyundai became the first major automobile manufacturer to reduce operations outside of mainland China.

In China, Hyundai and several other automakers have already followed government guidance and ordered factories to close. Those manufacturers include Tesla, Ford, PSA Peugeot Citroen, Nissan and Honda Motor.

"Hyundai and Kia may be more affected as they ... import more parts from China than other global automakers," said Lee Hang-koo of the Korea Institute for Industrial Economics & Trade.

Many other businesses are preparing for losses from the viral outbreak. For some companies, the damage has been delayed, thanks, in part, to timing. The outbreak hit just when Chinese factories and other businesses were closed for the one-week Lunar New Year holiday. Now the holiday has ended, and worldwide shortages may be coming.

"There's complete uncertainty,'' said Steve Pasierb, head of the Toy Industry Association, a trade group in the United States. "This could be huge if it goes on for months,'' he added. 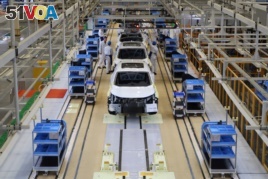 The Chinese city of Wuhan is the center of automotive production. The viral outbreak has hit Wuhan and neighboring cities hard. The government has closed off the area, where more than 50 million people live. The factories where they work are closed.

For now, United States automakers have not had to slow production because of a lack of Chinese parts. But David Closs says time is running out.

"I would say it's weeks at the most,'' he told The Associated Press. "One to two to three weeks.''

The partial closure of Wuhan has already slowed the production of televisions and raised prices, reported research group IHS Markit. The city has five factories that make instruments used in the manufacturing of televisions and laptop computers.

David Hsieh works for IHS Markit. He noted in a report that "these factories are facing shortages of ... labor and (important) components" because of the efforts to contain the virus.

Telephone maker Motorola has a production center in Wuhan. The company said that it has a flexible worldwide supply chain and many factories around the world, so it does not expect many problems. It also said it is worried about its workers. Motorola is owned by the Chinese electronics producer Lenovo.

Apple chief Tim Cook told industry experts last week that his company's suppliers in China had been forced to delay reopening factories that closed for the Lunar New Year. Cook added that Apple is seeking ways to minimize supply chain problems. Most of the company's iPhones and other electronic devices are made in China.

uncertainty – n. the condition or quality of being unsure

emeritus – n. someone retired from employment, but permitted to hold an honorary position

supply chain – n. a system of many products from different places being used in a final product

component – n. an important piece of something