Update Required To play the media you will need to either update your browser to a recent version or update your Flash plugin.
By VOA
25 May, 2016


There is a saying that laughter is good for the soul.

When we interviewed Iraqi-American Andy Shallal at his Washington, D.C. restaurant, we did more laughing than talking.

Until the conversation turned to freedom of expression.

Shallal, 60, was born in Iraq. In 1966, his father, a diplomat, was assigned to the United States. Two years later, when Saddam Hussein seized power in Iraq, Shallal's father was out of political favor.

The family could no longer return to their homeland. 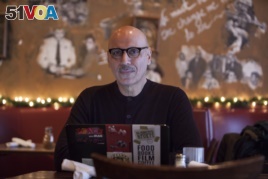 Shallal attended Catholic University in Washington, D.C. and medical school at Howard University. He worked awhile as a researcher in medical immunology at the National Institute of Health.

Shallal expresses himself artistically in many way. At Busboys and Poets hangs a civil rights mural called Peace in the Struggle Wall. Shallal is the painter. He holds leadership positions in numerous peace movement organizations. Among them are Iraqi-Americans for Peaceful Alternatives, created prior to the 2003 invasion, and the Peace Cafe, which seeks to promote Arab-Jewish dialogue.