Update Required To play the media you will need to either update your browser to a recent version or update your Flash plugin.
By VOA
07 September, 2014
51VOA听写整理，转载请注明出处。文本已经校对，欢迎纠错！

The American computer company IBM says it has developed a microprocessor -- a computer chip -- that works much like the human brain.

IBM calls the chip TrueNorth. It is the size of a postage stamp. The chip has 5.4 billion tiny parts that work like the human brain's neurons and synapses. Neurons and synapses are the cells and electric forces that carry messages to and from the brain. 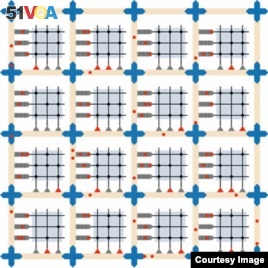 IBM's brain-inspired architecture consists of a network of neurosynaptic cores.

The company says the TrueNorth chip could be used as a brain for search-and-rescue robots. It can also be used for controlling new kinds of wheelchairs or for recording conversations involving several people and then making a printed record of those conversations.

TrueNorth is still being tested. But IBM says it could be available for public use in two to three years.

The chip is just one example of machines becoming more and more like humans. This field of study is called artificial intelligence, or AI. Some experts believe computers will someday become more intelligent than humans.

Jonathan Mugan has written a book about the relationship between humans and computers, called "The Curiosity Cycle." He told VOA by email that it is time to prepare for a future where computers have more control over our lives.

In his words, "machines are technology. And technology expands as human knowledge expands. By contrast, human intelligence developed through evolution, which is a much slower process."

Mr. Mugan believes that smarter computers are good for humans. He says intelligent machines can help humans solve many of our most difficult problems.

But he says "once computers become broadly smarter than humans, it's hard to predict what will happen."