ICRC in CAR Gives Agricultural Assistance to People in Need

The International Committee of the Red Cross is giving seeds and farm equipment to people in the Central African Republic (C.A.R.). The ICRC says families who fled rebel clashes in the area need the aid. Without the aid they may not survive. Other families have returned to their homes, but the clashes have destroyed their farms and grain storage buildings.

The clashes began in March 2013, when the mostly Muslim Seleka rebel group overthrew the president. The mostly Christian anti-Balaka group then attacked the Seleka group. Since then, the ongoing clashes have displaced more than one million people in the country. Tens of thousands of others have fled the area. 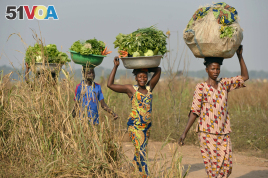 FILE - Women come back from the fields to sell vegetables at a market near the internally displacement camp close to the airport in Bangui.

The ICRC aid program targets more than 30 villages in the western part of country. It will give supplies to more than 13,000 people.

Jean-Francois Sangsue leads the ICRC office in the C.A.R. He says the ICRC is working with the Central African Red Cross to give agricultural aid to people who have been victims of attacks by armed groups since the end of last year. He says their fields were burned, and the rebels took everything from their homes, so the ICRC decided to help them plant new crops.

The ICRC says each family will get bags of bean, sesame and corn seeds, as well as farm tools. More than 2.5 million residents already need immediate humanitarian aid. The clashes caused poor harvests in 2013 and the country has little food.

The Food and Agricultural Organization reports about 95 percent of the country's communities say they will not have enough seeds for this year's planting season. Mr Sangsue says the low seeds supply could increase the number of people facing hunger.

He says people must be helped to return to their homes and begin growing crops. He says he hopes that in four or five months, people will be able to harvest their crops.

Mr Sangsue says as families wait for the crops to grow, the ICRC will work with its partners to give food aid. The organizations will help both those who have returned to their homes and those who remain in the country but can't go back to their farms.