If You Want to Grow Apples, Choose the Tastiest

Update Required To play the media you will need to either update your browser to a recent version or update your Flash plugin.
By Susan Shand
13 December 2020


If you're thinking about growing apples, now is the time to test different kinds and talk with local growers.

This advice comes from gardening writer Lee Reich. His books include "The Pruning Book" and "Weedless Gardening." 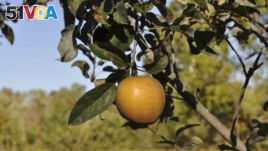 Reich grows an apple called Hudson's Golden Gem, and he does so for one reason – the taste. He says the fruit's wonderful flavor makes it truly special.

When you buy apples at the store, your choice is limited to the 12 or more kinds available for sale. They might be chosen because they look pretty, ship well, store well or have a taste that many people like.

Gardeners, however, have more choices. They can plant any of more than 5,000 different kinds of apples. They can also plant and grow without worrying about appearance or shipping ability.

In the early 20th century, plant expert Liberty Hyde Bailey cofounded the American Society for Horticultural Science. About apples, he said: "Why do we need so many kinds . . .? Because there are so many folks."

Gardeners can also harvest their apples just as each kind reaches its moment of perfection. Reich says his Macoun apples taste much better than any Macoun apples found in stores. One reason is because his can be left to ripen until they nearly fall off the tree.

Here are some other flavorful apples to plant. While some may have small problems, Reich says they all taste great.

The Ashmead's Kernel apple was first grown more than 200 years ago in a garden belonging to a Dr. Ashmead in Gloucester, England. The apple has a reddish, golden brown color. Inside, it has tasty, sharp flesh.

Cox's Orange Pippin is another old apple from England. It was first grown by Richard Cox in 1825. This apple's orange and red color makes it unpopular in the American market. But it is loved for its strong taste. Cox is still grown by British farmers even though it has some problems with storage and shipping.

Ellison's Orange is another British apple that came from Lincolnshire in 1911. It is a late summer or early autumn apple, golden yellow with stripes, with juicy flesh. It has a slight taste of anise.

Not all the good apples come from England. Macoun started in New York, in 1923. Hudson's Golden Gem is also American, and was first grown in an Oregon garden in 1931.

Another American apple that Reich has grown is Newtown Pippin, which began in New York City about 300 years ago. The yellow fruit has a sharp taste. It should be stored and eaten after Christmas for the best taste. Newtown Pippins were shipped to England in colonial times because they were so tasty.

The Mutsu Crispin apple came from Japan in 1948. This large, round, yellow apple has a spicy taste.

Jonagold was introduced 40 years ago by the New York State Agricultural Experiment Station. It is a crisp, tasty apple that seems to explode in your mouth with juice.

Reich also includes in his apple collection New York's Liberty, which dates to 1978. Besides having a wonderful flavor, Liberty is also resistant to many diseases.

But before you run out to buy trees to grow the kinds you love to eat, Reich does have a warning: Apples are not easy to grow in many parts of the country. The plants require yearly pruning and insect control.

But if you're willing to learn how to keep the unwanted insects away, a few kinds of trees chosen for their taste will give you years of good eating.

Garden writer Lee Reich reported this story for The Associated Press. Susan Shand adapted it for Learning English. Bryan Lynn was the editor.

gardening – n. to work in a garden : to take care of the plants

ripen – v. fruit that becomes ready to harvest and eat

flesh – n. the soft parts of a piece of fruit

anise – n. a plant with seeds that are used in cooking

spicy – adj. flavored with many herbs

crisp – adj. pleasantly firm and making a sharp sound when chewed or crushed

juice – n. the liquid part that can be squeezed out of vegetables and fruits

prune – v. to reduce a tree or bush by removing parts that are not necessary or wanted