Ikea Designers Live in Mars Research Center to Get Ideas

Update Required To play the media you will need to either update your browser to a recent version or update your Flash plugin.
By Bryan Lynn
22 June, 2017


Ikea is known for designing furniture that people can put together themselves. Recently, a team from the Swedish company spent time inside a Mars research center to get new design ideas.

For three days, five Ikea designers lived inside the Mars Desert Research Station in the U.S. state of Utah. The center is operated by the Mars Society. It simulates a Mars environment for humans taking part in experiments and training.

Real astronauts have spent long periods of time inside the research center to prepare for space flights.

"It's a crazy, fun experience," said Ikea Creative Leader Michael Nikolic, who took part in the project. "We're basically completely isolated for three days to get a taste of what astronauts go through for three years."

The team spent most of its time inside the Mars habitat – a round, two-story building just eight meters in diameter. The habitat contains a laboratory for doing experiments, as well as separate areas for eating, sleeping and other activities. 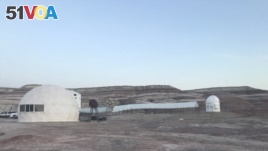 The Mars Desert Research Station in Utah simulates a Mars environment for humans taking part in experiments and training. (Ikea)

The habitat attempts to create an environment similar to conditions astronauts would experience during a real Mars mission. It also prepares future space travelers for living in very small areas with limited supplies.

Some people - including SpaceX founder Elon Musk – have talked about setting up a human colony on Mars in the future.

The Ikea researchers received NASA training before heading to the research center. Their guide during the habitat visit was space architect Constance Adams.

She said the experience was meant to show the team how conditions in space affect the whole design process. For example, air is very limited in space and must be reused for many months, even years. This means all living materials have to be designed with this in mind.

Another consideration is the huge cost of space transportation. Adams said it would currently cost about $2 million to transport just one kilo of mass to the surface of Mars.

This makes it impractical for Ikea to send materials to Mars, unless the cost can greatly be reduced. But the company says by looking to space, it hopes to come up with better design ideas for people on earth.

"My dream outcome would be to solve the biggest problem on earth. I guess it's the same problem in space - and that is the thing about storage. How could you make storage in a completely new way?"

He said putting the designers in such a different and demanding environment forces them to think much more creatively.

"Then, from out of that, we get solutions that I think will work on earth better than anything."

The Ikea designers are also working with people from NASA and students from Sweden's Lund University to create a space-inspired furniture collection to launch in 2019.

And who knows, Ikea might even make it to Mars someday. If so, the company's popular products could be discovered by new life forms we don't even yet know about.

We want to hear from you. Do you think humans will ever live on Mars? Write to us in the Comments section, and visit 51VOA.COM.

isolate – v. separate someone or something from other people or things

diameter – n. distance through the center of something from one side to the other

impractical – adj. not easy to do or use