Lack of Progress in Reducing Poverty

Update Required To play the media you will need to either update your browser to a recent version or update your Flash plugin.
By Christopher Jones-Cruise
29 May, 2016


A new report says years of progress made in reducing poverty worldwide are under attack.

The International Labor Organization says the progress is being threatened by weakening economic conditions and a lack of quality jobs.

The ILO recently released the report. It is called "World Employment and Social Outlook 2016 -- Transforming Jobs to End Poverty."

The ILO says great progress in reducing poverty has been made over the past 20 years. The report explores the issue of extreme poverty in 107 emerging and developing countries. 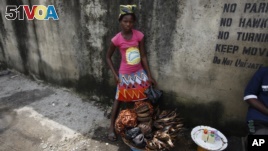 Twelve-year-old, Kemi Olajuwon, who has to drop out of school some days to sell smoked fish and make money so there can be food in the house, and also for her school fees, displays her fish on the street in the Obalende area of Lagos, Nigeria, Tuesday, June 17, 2014.

Extreme poverty was defined as earning less than $2 a day.

The report found that in those countries, the number of people with such an income fell by almost half since 1990 to about 15 percent in 2012.

But not every country has experienced falling rates of poverty.

Guy Ryder is the ILO's Director-General. He says there have been great improvements in China and in Latin American countries. But poverty remains high in Africa and parts of Asia.

"For example, more than 40 percent of the African population continues to live in extreme poverty and some 64 percent in extreme or moderate poverty. Another element -- which I think we have to pay attention to -- is the fact that in the developed world, there has been an increase, an absolute increase in poverty, notably in this continent of Europe."

Ryder says the recent worsening of economic conditions in Asia and Latin America suggests a cloudy future for poverty reduction efforts there. He noted that economic growth does not mean a reduction in poverty.

He says income inequality is beginning to increase after dropping for many years. He says that hurts the ability of people to get out of poverty.

"In addition, the ability of growth to reduce poverty is compromised by the inequitable income distribution, showing that the rich are taking a disproportionately high share of the benefits of growth and, in a way, could be considered partly responsible for this perpetuation of poverty."

The ILO says United Nations' efforts to end poverty everywhere are at risk of failing.

Lisa Schlein reported this story for VOANews. Christopher Jones-Cruise adapted it for Learning English. George Grow was the editor.

emerge – v. to become known or regarded as something

element – n. a particular part of something (such as a situation or activity)

absolute – v. not depending on or compared with anything else

inequitable – adj. not fair or equal

distribution – n. the way that something is divided or spread out

disproportionate – adj. having or showing a difference that is not fair, reasonable or expected; too large or too small in relation to something

perpetuate – v. to cause (something that should be stopped, such as a mistaken idea or a bad situation) to continue