Image of Clowns Changing Over the Years

Update Required To play the media you will need to either update your browser to a recent version or update your Flash plugin.
By Phil Dierking
26 September, 2017


Clowns are almost everywhere these days in popular culture. They can be seen in movies, on television shows, at musical performances, and sometimes just walking in the streets.

Clowns are perhaps best known for performing in traveling circuses. They have been making crowds laugh for generations. But what they represent in popular culture has changed a lot over the past 400 years.

A history of the clown

Clowns have existed in different forms for a long time. Researchers have found evidence of clowns in ancient Rome, China, and Africa. Their job was to make the ancient rulers laugh.

At least one Native American group, the Hopi Tribe, also has a tradition involving clown-like characters.

Clowns began appearing in the form we recognize today in the 17th century, as a character known as a harlequin. They were common in European theater, and played a character who acted foolish or played tricks. A harlequin wore colorful clothing and covered his face with a mask to protect his identity.

Bringing clowns to the U.S.

Clowns from Europe arrived in North America after England began exporting circuses, with their clowns, other performers and trained animals. Starting in the early 1900s, circus shows were very successful in the United States.

In the 1950s and 1960s, the popularity of clowns grew because of television. Bozo the Clown appeared in a number of TV programs for children.

Also in the 1960s, McDonald's, the fast-food business, chose a happy clown to appear in its advertisements. Today that company mascot, Ronald McDonald, is world famous. 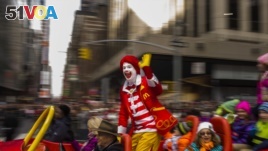 FILE - Ronald McDonald waves to the crowd during the Macy's Thanksgiving Day Parade, in New York, on November 26, 2015. McDonald's says Ronald McDonald is keeping a low profile with reports of creepy clown sightings on the rise.

However, the image of a happy clown is largely an American creation. So says Benjamin Radford, who wrote a book called Bad Clowns. In other cultures, he says, the clown character is not necessarily good.

"It's a mistake to ask, ‘When did clowns go bad,' ... because clowns were never really good. Clowns have always been ambiguous. The clown character originally... is a trickster figure... you can't easily categorize them. Is it somebody who is going to make me laugh, or attack me?"

Radford said that at first, clown shows were meant for adults, not children. In fact, clown characters were meant to be a critique of society or projections of the fears and concerns of everyday people.

One example is "Mr. Punch," a clown puppet character. It was popular in British and French theaters during the 1700s and 1800s. While Mr. Punch was funny, he was also violent, often hitting his wife during the show.

In the 18th century, English actor Joseph Grimaldi became famous for playing a clown in theaters. Grimaldi himself was reported to be an alcoholic and suffered from depression. Literature experts say Charles Dickens remembered those qualities when he created a clown character in his book The Pickwick Papers. The character made people laugh, but was sad and lonely when he left the theater.

The idea of clowns frightening people started gaining strength in the United States during the 1970s, partly because of John Wayne Gacy.

Gacy was a registered clown in the Chicago, Illinois area. He performed for children as a clown character called "Pogo the Clown." But between 1972 and 1978, Gacy killed more than 35 young men. He was eventually arrested for the killings. While in prison, he painted many pictures of clowns, including himself as Pogo. Some newspapers began calling Gacy the "Killer Clown."

In the 1980s, evil clowns began appearing in movies like Poltergeist and Killer Klowns from Outer Space. In addition, the Stephen King book It was made into a television miniseries. Probably the most famous evil clown character is "the Joker" character from recent Batman films.

Then, in the autumn of 2016, many Americans began developing real concerns about clowns.

Starting in South Carolina, people reported seeing individuals wearing clown costumes, often hiding in the woods or in cities at night. Some people said the clowns were trying to lure children into empty homes or the woods. Soon, there were reports of threatening-looking clowns trying to frighten both children and adults.

Although there were usually no reports of violence, and many of the reported sightings were later found to be false, this caused a nation-wide panic.

Even today, clowns have continued to play a strong presence as a dark or violent character. This year alone, a clown is the central villain in the movie version of It, which earned $123 million in its opening weekend. In addition, the current season of the TV series American Horror Story has a number of killer clowns.

The future of clowns

While clowns may be popular in the media, the attention is not always wanted. For people who work as -- or are training to be -- clowns, the "bad clown" image does not make their job easier.

In 2008, British researchers asked 250 children about clowns. The boys and girls were four to 16 years of age. The University of Sheffield survey found that most children did not like clowns, while many feared them.

This does not surprise David Carlyon. A historian, he once worked as a clown for the Ringling Brothers and Barnum & Bailey Circus.

"My theory, based on the evidence, is that the image of the clown as the little kid's friend and as the ideal of sweetness and light became so overblown, so inflated, that it had to be popped."

For most people who work as clowns, their job is to make people happy and laugh. Zach Steel trains future clowns at The Clown School in Los Angeles, California. Steel says he and his students choose to ignore the attention around bad clowns.

"If I spent all my time trying to combat that and telling those people to be quiet, I would have no time to do anything else - to actually pursue what clown actually is, which is a positive, creative, imaginative presence in our lives, a manifestation of all of our desires to pursue pleasure and pursue fun and connect with each other on those levels."

Lisa Long, known as C.C. the Clown, says she is sure that clowns still have a bright future.

"How often do you get a chance to really laugh or be silly and have fun? I think people are attracted to that, to the laughter. And what I do as a professional children's entertainer is I bring that, sometimes to children who may not have had a chance to even laugh that day or that week. And the opportunity to bring laughter - I think that's what attracts people to clowns."

She adds that as long as there are still children in the world, there will still be a future for clowns.

Phil Dierking wrote this report for VOA Learning English. His story includes information from The Smithsonian magazine, The Guardian newspaper and other sources. George Grow was was the editor.

Are there clowns in your country? Do clowns frighten you? We want to hear from you. Write to us in the Comments Section or on 51VOA.COM.

alcoholic - adj. a person who frequently drinks too much alcohol and is unable to live a normal and healthy life

ambiguous - adj. able to be understood in more than one way

categorize - v. to put (someone or something) into a group of similar people or things

harlequin - n. a comic character in old stories and plays who wears a mask and colorful clothes with a diamond pattern

inflate - v. to add air or gas to (something, such as a tire or a balloon) and make it larger

lure - v. to cause or persuade a person or an animal to go somewhere or to do something by offering some pleasure or gain

manifestation n. one of the forms that something has when it appears or occurs

puppet - n. a doll that is moved by putting your hand inside it or by pulling strings or wires that are attached to it