Update Required To play the media you will need to either update your browser to a recent version or update your Flash plugin.
By Andrew Smith
23 September 2022


Large fields of water lilies will grow in a New York City neighborhood this autumn, at least digitally.

A very large show celebrating French painter Claude Monet will open in November in a building once used as a bank in the Wall Street area. The name of the show is "Monet's Garden: The Immersive Experience." The immersive experience uses digital technology to show very large images of Monet's paintings on the walls and floors of the building. It has music, the smell of lavender, and voice-over in several languages to help visitors immerse in the experience.

Dr. Nepomuk Schessl is the producer of the exhibition. He said, "To be able to address more than just two senses I think will immerse people a bit more." 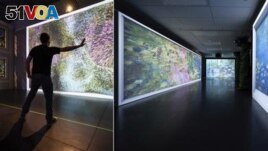 Monet lived from 1840 until 1926. During his life, Monet changed from painting traditional, realistic images to capturing light, atmosphere and movement.

Schessl explained that Monet "was living right at the moment when photography was invented. So, the whole world of art changed."

The show will offer many of Monet's works, from the rocky coastline of Normandy to the Japanese bridge and water lilies at his home in Giverny.

Swiss creative lab Immersive Art AG developed the idea for the show along with Alegria Konzert GmbH. It has already been shown in some European cities and will be shown in London.

In some ways, Schessl thinks a huge 360-degree presentation of Monet's works fits with what Monet wanted. "He wanted the spectator to completely immerse himself or herself into the painting," said Schessl.

Schessl says he looks at these kinds of exhibits to make sure his team knows about the newest technologies and ways of making immersive experiences possible. But he said the paintings should always be the center.

"The technology is our means to achieve something, but it never should only be the technology," he said.

water lilies -n. types flowering plants that grow in ponds of water and float on the surface

immersive/immersed –adj. completely surrounded by something or engaged in a way that engages all of one's attention and senses.

lavender -n. a type of flowering plant with purple color and often used for scent in soaps, candles, and the like

to address -v. to bring attention to

exhibit -n. a display, usually of a form of visual art, such as a display of paintings in a museum.

spectator -n. a person who views or watches an event such as a concert, athletic competition, museum exhibit, and the like

means to -n. the ways, methods, or things that are used to do something