Immigrants Find Their American Dream in the Kitchen

Update Required To play the media you will need to either update your browser to a recent version or update your Flash plugin.
By VOA
27 August, 2016


"They face the same challenges that any immigrants face: a different language, a different culture. They have left behind the whole world that they know: their neighbors, their parents, their kids, their friends, their whole identity. And they came looking for the American dream, to learn - and in the end they only need a chance."

Chef Ben Velasquez is talking about the students at Carlos Rosario International Public Charter School. He says that local governments in the U.S. must teach students at least to a high school level. But immigrants may come as adults. They may come from a country where they did not receive the same educational opportunities.

So when immigrants come to the U.S., they may have a hard time finding work. If they don't speak English well, or if they lack job-specific skills, then employers may not want to hire them.

Immigrants often find work in service industries like hotels, restaurants, and personal care. These workers do not need college degrees, but they must have job-specific skills and English language skills.

One such school is Carlos Rosario International Public Charter School.

In 1998, the school became the first adult public charter school in the United States.

Preparing to be a chef

They also learn knife skills and how to balance a meal. Balancing a meal means choosing the correct kind of protein, starch and vegetables for a meal. 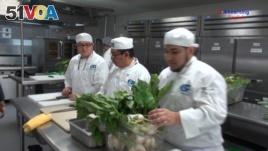 Teachers instruct students in mise en place, a French expression, which means how to prepare food before it is cooked.

"...how to peel, how to have everything ready. Cooking is easy, but peeling onions, chopping onions, slicing onions, dicing onions; preparing tomatoes for the next preparation, that is what's really time consuming. And in French that is called mise en place. So students learn."

By the end of the first year, Chef Velazquez says, students are prepared to take a job as an entry-level chef in a restaurant.

The second course in the culinary arts program, "International Cuisine", lasts five months. It focuses on the cuisines of different cultures around the world – European, South American, and Asian.

"... learning is a process that doesn't really stop. We all learn new things every single solitary day. But I find out that technology is one of the biggest setbacks for them to really reach all of their potential."

Because of this, the culinary arts program teaches students basic technology skills. Students learn to use common office applications.

Now, even cooks have to be familiar with technology. Chefs order from produce providers on the computer and customers make reservations online. Restaurants depend on customer reviews and social media to promote their business.

Certifications and connecting skills to jobs

Many health departments require the ServSafe certificate. Students who pass the test can work in kitchens in Washington DC, or in different states around the U.S.

Students at Carlos Rosario can work for other certifications that show the job skills they have learned. One graduate has earned the Certified Executive Chef certification, the same as a Bachelor's Degree in cooking.

The importance of community

The element of support is critical to the school's mission.

Chef Velazquez told a story about how the school substitutes for the friends and family members the student left behind.

One day, around 2 o'clock, a student came to see Chef Velazquez. She asked him if she could stay at the school that afternoon. The other employees left the room, says Velazquez, and he closed the door.

"Listen, the employees went to the cafeteria, tell me what happened. And she started crying, but she was happy, it was not sad, she was happy. And she said "you know what I just came from Baltimore... I became a United States Citizen today. And I don't have any other place to go and celebrate." She feels that the school is her home. So, we both cried, you know, because, it was a very emotional moment. That tells you how these students feel this school is their home. We are their family. And I said "thank you very much for coming and sharing that information with us. Now, you can vote."

Citizenship is another goal that students can reach with the help of the school. Classes meet regularly at Carlos Rosario to prepare students to take the examination for becoming a naturalized citizen of the U.S.

An upcoming article will tell the story of two students in the Culinary Arts program at Carlos Rosario.

John Russell reported on this story for VOA Learning English. Mario Ritter was the editor.

state of the art – adj. using or having the most modern methods, knowledge, or technology

fundamental - adj. forming or relating to the most important part of something

application –n. a computer program, such as a word processing program

reservation –n. an informal agreement to be at a place like a restaurant at a certain time

certification –n. to receive an official document stating you have a skill or can do some kind of job

What special training do you have? What would you like to learn? Write to us in the Comments Section