Update Required To play the media you will need to either update your browser to a recent version or update your Flash plugin.
By George Grow
08 November, 2017


There are plenty of ways to see a city. Visits to historic homes, famous statues, and even ghost tours under the night sky are just a few.

But maybe only Columbus, Ohio, has tours designed for food lovers.

Bethia Woolf writes about food on her blog. In 2010, she launched Columbus Food Adventures, in part because of the city's immigrant groups. Immigrants represent nine percent of the total population.

Columbus Food Adventures can take you on a taco truck tour, with stops at food trucks specializing in Mexican cuisine. The business also offers German village tours and what Woolf calls the ‘Alt Eats' tour. 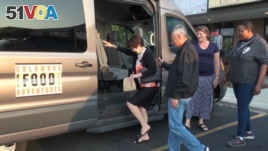 Tourists on a Columbus Food Adventure climb aboard to visit some of the city's many ethnic restaurants in Ohio on Nov. 1, 2017.

"This unique city tour centers on the thriving ethnic enclaves of north Cleveland Avenue, where much of Columbus' immigrant community lives, eats, and plays," notes the company's website.

Food lovers are guided to explore little-known ethnic restaurants, all within a short walk of one another.

"We visit Indian, a Mexican bakery," Woolf explains. "We visit Nigerian, Vietnamese, and Somali (restaurants)." She says the company's tour guides make sure to tell people about the food they will eat.

Columbus now has ethnic restaurants from more than 40 nationalities, and more are being added all the time.

"We recently found a market that is offering Sudanese food," Woolf said. "Without leaving Columbus, you can explore all these different cuisines."

Columbus Food Adventures tours are popular with visitors to Columbus and natives to the city.

Gloria Chavez is a visitor from California.

"It's just a great way to try new foods and meet new people and learn about different cultures. It was great!"

For Brian Wolf and his wife, the tour is a guide to fine eating in his own city.

"Now we will definitely come back to these restaurants because they're all within 10 minutes of where we live and all of them have been delicious."

Momo Ghar was at one time one of the restaurants on the tour. Guides had to lead their groups inside an international market to get there. The Nepalese and Tibetan eatery had just two small tables and a counter close to where the food was prepared.

But its appearance can fool most people. Momo Ghar is Yelp's No. 1 restaurant in Columbus.

Phuntso Lama is the owner of Momo Ghar.

"Momo is dumpling. We make a lot of dumplings. We are making probably several thousand dumplings a day. We have to keep up with the demand."

A Nepalese immigrant, Lama says Momo is almost like a national dish in Nepal. She is happy that the tastes she brought from her native land are so popular in her new home.

"All those are flavorful and super tasty and filling and really cheap. So, it's a great affordable meal. That's why we keep coming back."

The rise in immigrants to Columbus has also helped energize aging shopping centers as the newcomers open businesses and restaurants.

Guadalupe Velasquez is assistant director for the city's Department of Neighborhoods. She told VOA that the central Ohio area is home to an estimated 150,000 to 200,000 immigrants and refugees. "The total local and state taxes paid by immigrants is $340 million," she said.

Lama is planning to expand her restaurant business. "Employees, I have about 14 or 15 of them," she said. "The reason I have so many right now is I am training a lot of them because we are opening a second location."

June Soh reported this story for VOANews. George Grow adapted her report for Learning English. Mario Ritter was the editor.

ghost – n. the spirit of a dead person

tour – n. a trip for business, education or pleasure

blog – n. a weblog, an online record someone keeps of their thoughts or activities

enclave – n. a territorial or cultural part of a larger area

avenue – n. a street or road

cuisines – n. a style of cooking

delicious - adj. having a pleasing taste

dumpling – n. a small piece of food that is heated