Update Required To play the media you will need to either update your browser to a recent version or update your Flash plugin.
By Dan Friedell and Pete Musto
07 January, 2017


Over 1 million migrants arrived in Europe in 2015. Most were fleeing struggling economies and war in places like Syria, Iraq, Afghanistan and East Africa.

Many of these people arrive in new countries and expect life to become easier almost immediately. After all, they just traveled months by foot and by boat just to get to a new country and start fresh.

But when they arrive, the migrants face a world that can be confusing in many ways. 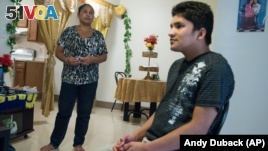 Ajuda Thapa, left, stands near her son, Jay Thapa, in their home in Burlington, Vermont.

Melissa Fogg is the program manager for the Philadelphia Refugee Mental Health Collaborative (PRMHC). The PRMHC is an organization that helps refugees entering the U.S. build their lives in their new country.

The PRMHC teaches the refugees skills and helps them adjust to living in a different environment. Fogg told VOA that weather, language and safety issues are only some of the things that can cause problems.

"A lot of immigrants and refugees ... when they come, they have a very idealized version of the United States from movies, magazines, the media ... And a lot of that is just not true. ... Generally, our country is very welcoming and very accepting of immigrants. But it can be a tough environment to come into, with a lot of barriers."

What seems normal in one country might be illegal in another country. For example, men and woman have equal rights under the law in the U.S.

There are laws about gender equality in many countries. These laws can be hard for new arrivals to understand. But that is not the only confusing thing about being in a different country.

Some laws and rules are written down. You can learn about them before you arrive. But there are lots of "unwritten rules," too. Unwritten rules are behaviors that no one talks about, but that most people understand.

People in a host country might think their behavior is normal, while newcomers might find it offensive or inappropriate. Fogg said that these differences can make becoming part of a new culture seem impossible.

"When people come to a new country, at first they're very excited... Shortly after that, there is reality that sets in. America's not a perfect country..."

But, after some time and a lot of work, most new arrivals begin to feel like they belong, Fogg said.

Also, it is important to know that not all differences are major. Often there can be small differences between places that share a border and a language.

A person from Canada might find people in the United States are less polite. Likewise, Americans might find Canadians too reserved.

Fogg and VOA worked together to create a list of five important issues any new arrival to the U.S. should know about.

Be "on time." In some cultures, time is not a big issue. If you tell your friend to meet you at 2 p.m. and you arrive at 2:45 p.m., there is no problem. In the U.S., people feel that being on time is a sign of respect. If you are late by more than a few minutes, people will think you do not care. They will feel you are wasting their time. They will take your lateness as an insult. Being on time is even more important in a professional or formal situation, such as a job interview or when you plan to see a doctor.

Be sure you always "tip." In many countries, after you eat at a restaurant, you only pay the amount shown on the bill. But, in the U.S., people who work in restaurants and bars often earn a low hourly wage. So, they try to provide excellent service, hoping the customer will give them a "tip," meaning a little extra. Tips are extra money you pay above the cost of the meal. People in the U.S. tip between 15 percent and 20 percent of the bill. You also give tips to taxi drivers, hotel employees and the people who cut your hair.

Be careful what you say. Any place you go there will be some things that are appropriate to talk about and some things that are not. Would you talk about how good you feel with a person who is very sick? Probably not. In addition, many people in the U.S. can feel strongly about some topics that people in other cultures have no problem discussing. Assuming that people have the same beliefs as you is a bad idea. In the past decade, people in the U.S. have become more open about discussing strong political and religious views. But it is still best to listen to people share their opinions first and then decide about sharing your own. Also, there are several topics you should avoid asking questions about: how much money a person makes and if they are married. But if a person offers this information, then there is no problem.

Be aware of "personal space." Physical contact is the best way to show someone they are your friend or loved one in some cultures. Other cultures feel that showing affection in public is highly inappropriate. People in the U.S. fall somewhere in the middle on this issue. Two people usually do not kiss when saying "Hello," unless they are family members or very close friends. Shaking hands is the most common thing to do when meeting someone. Also, people in the U.S. dislike it when strangers stand very near them.

Be polite for the situation. People in the U.S. define being polite in very special ways. For example, waiting in line involves a strong set of rules in this country. You must wait until the people in front of you have done what they are waiting to do. When going through a door, the person behind you expects you to hold the door for them. Also, it is common for people you do not know to say some form of hello to you when passing you. But this does not always mean they are inviting you to stop and talk for a long time. Many times the person is just being friendly. If you don't say hello back to them they may think you are being unfriendly. You should examine the situation and think about what you want to do next.

Dan Friedell and Pete Musto wrote this story for Learning English. Kathleen Struck and George Grow were the editors.

We want to hear from you. What are some situations you faced while visiting the U.S. that you were not prepared for? What are some things people should know about the culture before visiting your country? Write to us in the Comments Section or on 51VOA.COM.

migrant(s) – n. a person who goes from one place to another especially to find work

adjust – v. to change in order to work or do better in a new situation

tough – adj. very difficult to do or deal with

set(s) in – p.v. to begin to be present or show something unpleasant or unwanted that often lasts for a long time

assuming – v. thinking that something is true or probably true without knowing that it is true