Immigrants Play Big Part in Caring for Older Adults, Disabled in US

Update Required To play the media you will need to either update your browser to a recent version or update your Flash plugin.
By VOA
08 June, 2019


Proposed limits on immigration to the United States may worsen the nation's shortage of workers who care for old and disabled people, a new study finds.

More than three million immigrants work within the U.S. healthcare system. That represents 18 percent of all health care workers. Nearly 25 percent of care providers in nursing homes nationwide are immigrants. Nursing homes care for elderly adults and people with a physical disability or long-term health disorder.

Doctor Leah Zallman is a professor of medicine at Harvard Medical School in Massachusetts. She was the lead writer of a report on the study. The report appeared earlier this month in the publication Health Affairs. 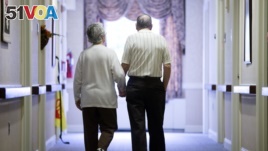 FILE - In this Nov. 6, 2015 file photo, an elderly couple walks down a hall of a nursing home in Easton, Pennsylvania. (AP Photo)

Zallman said, "We rely heavily on immigrants to care for the elderly and disabled, particularly in their everyday care."

To take a closer look at the importance of immigrants in the healthcare system, Zallman and other researchers examined the Annual Social and Economic Supplement of the 2018 Current Population Survey.

The survey found that 1 million workers in the long-term healthcare industry were immigrants. That represents 23.5 percent of total workers in such jobs.

Zallman noted that immigrants are especially likely to work overnight hours. "This is an industry that needs people round-the-clock," she said. "They [immigrants] are really filling the gaps."

In 2017, more than 27 percent of direct care workers were immigrants. The study defined "direct care work" as nurses, home health aides or home care aides. Such workers help with everyday activities like helping people eat meals, put on clothes, and wash up.

Nurses and health aides perform other duties, such as taking a patient's blood pressure and offering range-of-motion exercises.

Home care aides may help clean a patient's home and cook food for them. They do not perform medical tasks.

The elderly population in America is expected to double by the year 2050. Workers who are prepared to care for elderly or disabled patients are already in short supply, the researchers noted.

The Health Resources and Services Administration predicts a 34-percent rise in the demand for direct care workers over the next 10 years.

Albert Wu is a doctor and professor of health policy at the Johns Hopkins School of Public Health in Maryland. He called the new study "very important and timely."

Wu said, "The current proposal to restrict immigration to more skilled or professional applicants runs directly counter to the need for this category of work."

survey - n. an activity in which many people are asked a question or a series of questions in order to gather information about what most people do or think about something

counter - n. something that is made or done as a defense against or response to something else

round-the-clock - n. happening or continuing all day and all night