Update Required To play the media you will need to either update your browser to a recent version or update your Flash plugin.
By Alice Bryant
19 May 2020


Have you ever learned to do something with the help of an internet search? The answer is likely "Yes!" In fact, you probably learned many things by watching how-to videos.

How-to videos show people how to do or make something. They can cover nearly any subject, from simple things like how to make an origami animal to more complex things like replacing car parts. 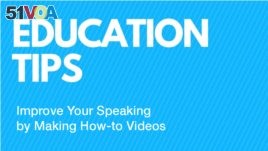 On today's Education Tips, we will give you tips for making your own simple how-to video. You do not need to show it to anyone or put it on the internet. Instead, the goal is to use the video to observe your own English speaking skills.

You may be wondering how such videos can improve your English.

Recording yourself, whether on video or audio, is an effective method of self-study. This is especially true if you cannot find someone to practice speaking with. When you record yourself, it helps you identify what you are good at in English and which areas need improvement. As you continue the method of speaking on a recording, you can make the changes you want.

How-to video videos give you the chance to do several things at once. You will talk about a subject you already enjoy while giving step-by-step instructions, which gives you a chance to use a few grammatical forms. You will also get the chance to learn and use words related to your chosen subject.

Now, let's go through the steps for preparing to make your video.

The first step is to choose a subject that will work well for a short video. Set a goal of not going over six or seven minutes for video length.

Ideally, your subject will be something that is visually appealing and can be divided into steps. Keep this in mind as you think about subjects.

Is there a dish that you are great at making? Can you build or fix something? Do you have an artistic ability, such as drawing, playing music or dancing? Any of these can be the subject of your video. Even something as simple as how to fold a fitted sheet can be a great subject.

After choosing your subject, it's time to prepare by gathering information.

First, make a list of the steps you think are important in making or doing the thing you have chosen. You might not know the English words for some of the things you are describing. For those, you can write the words in your own language and then take time to find and practice saying them in English.

Another great way to do these things is to watch a few how-to videos on your subject in English. Websites such as YouTube.com and Howcast.com cover almost every subject you can think of. And YouTube permits you to slow the speed of the video, which can help you understand English that may be spoken too quickly.

For our third step: aim for simple instructions. How-to videos are meant to make instructions easy and clear.

Taking notes can help organize your steps and decide which to include. Think about which ones to show visually and which only need to be described. For example, if a step is to heat water, pause the video if there is a long waiting period.

Some how-to videos use special video software to cut parts, put words on the computer screen or do other things. However, your main is goal is to speak fluently without worrying about mistakes, so avoid such software for now.

Finally, the last step is to record your video.

A great way to introduce it is to say your name and then say what you are going to show. You can even include a sentence or two about why your skill is good to learn. Or, if you are preparing food, you might tell how the dish got its name. Then, say what supplies are needed.

For examples of how this might sound and to read additional tips, visit our website at www.51voa.com.

How-to videos use sequence words when giving instructions. Some use words like "first" "next" "then" and "finally" to state the order of each step. Others say "step 1" "step 2" "step 3," or "the first step" "the second step," and so on. Do whichever feels more natural. This video on how to cook lobster tails makes the order of steps clear.

Instructions are also usually given in commands. In English, the command form leaves the subject out of the sentence. Instead, it begins with a verb and uses the shortest verb form with no s- ending. For example, "Then, fold the sheet in half" begins with the verb "fold." You can find examples in the lobster tail video and this one on sewing on a button.

Note that some videos use wording like "You need to..." or "You want to..." to tell people what step to do next. For example, "Then, you want to take this side of the sheet and fold it in."

Do not prepare too much

One small piece of advice: Avoid preparing too much. Remember that you will not be reading notes from a paper or computer screen. While recording, try to speak freely without thinking about making mistakes.

After your first recording, spend some time reviewing for things like grammar, vocabulary and fluency. Take notes on what you did well. And, take notes on a few errors so that you can improve in your second recording.

And don't forget to have fun!

origami –n. the Japanese art of folding paper into shapes that look like birds, animals and other things

tip –n. a piece of advice or useful information

audio –adj. of or relating to the sound that is heard on a recording or broadcast

fold –v. to bend one part of something over or against another part

fitted sheet –n. a piece of bedding cloth that has four corners, and sometimes two or four sides, fitted with elastic

introduce –v. to mention or refer to something for the first time