Update Required To play the media you will need to either update your browser to a recent version or update your Flash plugin.
By Christopher Jones-Cruise
26 April, 2015


Large governmental organizations controlled the production of seeds in Africa for many years. Owners of small farms had to buy their seeds from these agencies. But now there is an effort to make seeds from other suppliers available to African farmers. The new, improved seeds might someday help Africa feed itself.

Edward Mabaya grew up in Zimbabwe. There were ten children in his family. His father was a construction worker. His mother farmed their land. He says the small farm was very successful because his mother used different kinds of seeds.

He says it was a time when many new kinds of seeds were coming into Zimbabwe. He said some farmers began to use them and increased their crop production. Mr. Mabaya said his parents used the money earned from those crops to send all their children to school. 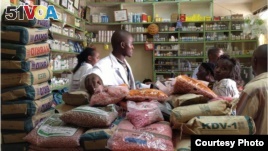 Mr. Mabaya is now a researcher at Cornell University in New York. He is working on a project that he hopes will give other small farmers the same chance his parents had.

He leads The African Seed Access Index (TASAI), which researches Africa's seed industry. The organization was launched in March. It is a joint effort of Cornell University, a non-profit group called Market Matters, Inc. and the U.S. Department of Agriculture.

TASAI hopes to provide improved seeds to owners of small farms. Mr. Mabaya says Africa's seed industry is complex and can be inefficient. He says TASAI will try to identify areas of the industry that can be improved.

Some private seed developers are operating in Africa but not many. And they have not worked to develop new seeds. Most farmers in Africa use the same seeds they have been planting for many years, unlike farmers in the Western world. The seeds have not been improved to resist disease or tolerate drought.

George Bigirwa works at the Alliance for a Green Revolution in Africa or AGRA. He says there are not enough improved seeds in Africa to supply the millions of farmers who need them.

"I remember when before AGRA came in, in some countries like Burkina Faso, like Mali, even Ghana, there were no seed companies. At least today you have an average of about six to eight seed companies in place. However, looking at the amount of seed each company produces, that is still very little."

Mr. Mabaya says this difference can be enough to help farmers who are now growing just enough food to feed their families. He says instead they could grow crops to sell, as well. He says that could help them escape poverty.

Mr. Mabaya says there is still much work to be done to fully develop Africa's seed industry. But he says if seed companies and farmers in Africa continue to use the same agricultural technology the rest of the world uses, Africa will someday be able to feed itself.

Hilary Heuler reported this story from Nairobi. Christopher Jones-Cruise wrote it for VOA Learning English. Caty Weaver was the editor.

access – n. being able to use or get something

inefficient – adj. not capable of producing desired results without wasting materials, time or energy; not efficient

tolerate – v. to allow (something that is bad or unpleasant) to exist, happen or be done

Do farmers in your country use improved seeds? We want to hear from you. Write your thoughts in the comments section.