In a Time of Rising Prices, College Is Next

Update Required To play the media you will need to either update your browser to a recent version or update your Flash plugin.
By Dan Friedell
12 February 2022


Around the world, the coronavirus pandemic has made it difficult for companies to produce and for people to buy goods. As a result, the price of things like meat, cars and fuel has risen.

Something else is set to get more costly, too: American colleges and universities.

In all parts of American life, people are paying more for workers, food and energy. As a result, colleges will also charge students more in the 2022-2023 school year. 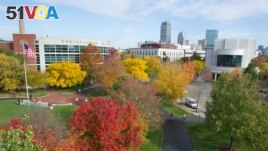 The campus of Northeastern University in Boston, Massachusetts.

Jim Hundrieser is vice president at the National Association of College and University Business Officers. He said that, for several years, college costs have increased somewhat slowly. But now, he said, "there's absolutely going to be an increase in tuition and fees."

The University of Virginia has already said it will raise its price for the next school year by almost 5 percent. Another school in Virginia, Virginia Tech, already raised prices for meals by 9 percent to help pay the people who work at campus eating places.

Along with the Virginia schools, colleges including Loyola of Chicago, Texas Christian University and the University of North Carolina at Wilmington all said prices will go up next year.

The price increases are a change compared to the last two years. The College Board reports that costs have not risen very much during the pandemic. But in the 10 years before that, college prices spiked, or rose sharply. During that time, the cost to attend public colleges rose 28 percent. The cost for private colleges went up 19 percent.

The coming rise in prices is more noticeable because many universities felt pressure to keep prices down during and just before the pandemic.

Those who run schools are worried that students who are in the middle of their studies may be surprised by higher costs.

David Jewell is senior vice president for business affairs at Cleveland State University in the Midwestern U.S. state of Ohio. The yearly cost to attend Cleveland State is about $27,000. The price includes tuition as well as estimated living costs. That is a lot of money, but it is less money than the cost of hundreds of other American colleges.

Jewell told The Hechinger Report that students who attend Cleveland State are often the first in their families to go to college. Many already have trouble paying for higher education. Even a small price increase for the next school year might prevent some students from attending.

Robert Kelchen studies education policy and leadership at the University of Tennessee. He said universities might need to delay repairing school buildings, reduce some services and increase class sizes to deal with their own rising expenses. Increasing tuition prices will not be enough.

"They have to look at other ways to cut costs," he said.

Cutting services will be difficult, another researcher said, because current students need more than before from their universities.

And it is not just students who want more. Professors want to be paid better. So do graduate students who teach part-time. Some universities stopped putting money into workers' retirement accounts at the start of the pandemic. But they have started to do so again.

Richard Garrett is a researcher at Encoura, a higher education advising business. He said universities and colleges "are being pushed to spend more, just when they don't have any more to spend."

Some of the costs will be covered by states that are spending more on education. For example, leaders in Colorado, Kentucky, Missouri and New York want to add money to the state's higher education budget.

In California, Governor Gavin Newsom said he would add more money to the state's education budget as long as the cost of attending college goes down. California State University has already said it will not raise tuition costs at its 23 campuses next year.

Jewell, of Cleveland State, said universities can "get creative" when trying to save money. They can do things like offer less costly foods at campus eating places.

With all the cost cutting, there is one bit of good news. Universities may finally change the way they spend money. Large state universities that have several campuses may decide to buy items like computers and computer supplies through a central office.

By making a large purchase instead of several smaller purchases, the universities can save money. The University of Massachusetts, which has five campuses, made this change in 2020. It already has saved $34 million.

Some schools may feel pressure to change the kinds of classes they offer. Some will cut classes that do not have enough students. Others will use technology to do more teaching by computer and video, which is less costly than gathering students in person. Some schools may start new programs for high-demand subjects.

Garrett, the researcher from Encoura, said people have been slow to recognize a "cost and productivity problem" at universities over the last 30 to 40 years.

"Maybe what's happening now," he said, "will make a difference."

Do you think you will have trouble paying for college if prices keep going up? Write to us in the Comments Section and visit 51VOA.COM.

How well do you understand the story?

expense – n. the amount of money that is needed to pay for something

campus n. the buildings that make up a school or university

fee – n. an amount of money that must be paid

anxiety – n. fear or concern about what might happen

graduate - adj. relating to a course of study that comes after a bachelor's degree or a first degree