Update Required To play the media you will need to either update your browser to a recent version or update your Flash plugin.
By Mario Ritter Jr.
03 October 2021


Many Asian countries that depend on exports are facing supply shortages, power cuts and other problems.

Japan's Suzuki Motor Corporation became the latest automaker to freeze production lines for several days because of a lack of parts. Suzuki said it expected to suspend operations at a factory in central Japan. Another factory is also expected freeze production for two days.

Japan's emergency coronavirus measures ended on September 30. But other countries have put restrictions back in place. This has made experts unsure about economic conditions.

Pandemic-related shutdowns have affected manufacturers across Asia. In Japan, factory production in August fell by 3.2 percent from the month before. Automakers and producers of information technology products and other electronic equipment were the hardest hit, the Japanese government reported.

Other automakers also have slowed operations. They say shortages of computer chips and other parts are interfering with normal production. 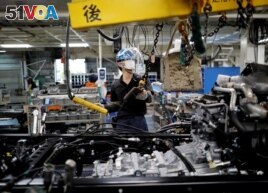 FILE - An employee wearing a protective face mask and face guard works on the automobile assembly line at Kawasaki factory of Mitsubishi Fuso Truck and Bus Corp, owned by Germany-based Daimler AG, in Kawasaki, south of Tokyo, Japan May 18, 2020. (REUTERS)

Shortages may last longer than expected

Retail sales in Japan fell 4.1 percent from a month earlier. That was more than expected. Weak demand for clothing and appliances were blamed for the decrease.

In a commentary, Harumi Taguchi of research company IHS Markit warned: "Risks of semiconductor and other component shortages could persist for an extended period." Semiconductors are very important part for electronics. Taguchi blamed new coronavirus infections in some countries and slow vaccination campaigns in Southeast Asia.

In addition to Japan, an official study of factory managers showed that Chinese manufacturing also slowed in August.

The Manufacturing Purchasing Managers Index is a widely-used measure of business activity. For China, the index number fell from 50.1 in August to 49.6 in September. An index value of less than 50 means that business activity is decreasing while a value over 50 means it is expanding.

The study was carried out before power shortages began causing factories in some parts of China to suspend operations.

Julian Evans-Pritchard of researcher Capital Economics said in a report that the chemical and metal industries, which are energy intensive, showed the most weakness. Pritchard said that business leaders "noted that material shortages and transportation delays were still holding back output."

Increasing demand for computers for people working from home instead of the office has resulted in limited supplies of computer parts.

Shortages of shipping containers and temporary shutdowns of ports because of COVID-19 outbreaks also have led to slowdowns in bringing products to market.

The Dutch bank Rabobank said in a report on the shipping industry that closures of ports have had long-term effects.

Rabobank reported: "Chinese and South-east Asian ports are still suffering the consequences of those earlier closures, with record queues of ships waiting to unload." Queue means a line of people or things in waiting.

It estimated that 10 percent of shipping containers around the world are on ships waiting to be unloaded at a port.

Elaine Kurtenbach reported this story for the Associated Press. Mario Ritter Jr. adapted it for VOA Learning English. Ashley Thompson was the editor.

retail –adj. sales of products to the people who use them and not to other businesses

component –n. one of the parts of something (such as a system or mixture) : an important piece of something

persist –v. to continue to occur or exist beyond the usual, expected, or normal time

manager –n. someone who is in charge of a business, department or similar organization

consequences –n. (pl.) something that happens as a result of a particular action or set of conditions