In Bolivia, Prisoners Can Reduce Jail Time by Reading Books

Update Required To play the media you will need to either update your browser to a recent version or update your Flash plugin.
By Ashley Thompson
06 May 2022


Prisoners in Bolivia have been given a new way to reduce their jail time. They can gain freedom earlier by reading books.

The government program is called "books behind bars." It offers detainees a chance to get out of jail days or weeks ahead of their release date. The program is modeled after a similar effort in Brazil. The aim is to improve reading ability. It is also meant to give hope to inmates who face Bolivia's slow judicial process.

The program has been launched in 47 prisons that do not have money to pay for education or social assistance programs for prisoners. 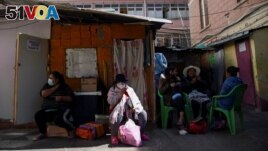 Inmates sit together at a prison that offers access to a small library as part of a program that aims to spread literacy and offer the chance to get out of jail earlier, in La Paz, Bolivia April 29, 2022. (REUTERS/Claudia Morales)

So far, 865 inmates are taking part in the program. One of them is Jaqueline. She has already read eight books in a year and has passed four reading tests.

"It is really hard for people like us who have no income and who do not have family outside," Jaqueline said. "There are people here, for example, who are just learning how to read and write."

Nadia Cruz is with Bolivia's Ombudsman's office. She said the aim is to encourage inmates waiting for the trial process to begin.

The group Human Rights Watch says the country's prisons and jails are overcrowded and unhealthy. Some detainees have protested over the lack of health care.

With these difficulties, learning to read can be like escaping the prison walls, at least for the mind. That is the case for Mildred, an inmate at the Obrajes women's prison in capital of La Paz.

"When I read, I am in contact with the whole universe," Mildred said. "The walls and bars disappear."

inmate –n. a person who is kept in a prison or mental hospital

income –n. money that is earned from work, investments or business

ombudsman –n. a person (such as a government official or an employee) who investigates reported problems and tries to deal with problems fairly

encourage –v. to make (someone) more determined, hopeful, or sure of what they are doing